Cold-seeding: how to maximise seedling survival with winter renovations

Posted on Monday 6 Jan 2020 in Guides & Advice & Golf Courses
Cold-seeding is the practice of applying new seed to an established sward in the late autumn or early spring when soil temperatures are below those required for immediate germination.

Cold-seeding is the practice of applying new seed to an established sward in the late autumn or early spring when soil temperatures are below those required for immediate germination: already established in the US as a proven means of maximising the survival rate of new seedlings, this method of over-seeding also works in the UK where it prevents the loss of newly established plants as a result of cutting heights being reduced too soon after establishment.

The traditional time for over-seeding work to be carried out is when soil temperatures reach the optimum range of 16-22oC.  Essentially this means overseeding work in the UK can be carried out any time between April and September, with the late-August or early-September ‘renovation week’ widely accepted as the most appropriate time for UK golf clubs to introduce new cultivars.

While this late summer timing has its advantages – warm soil temperatures, rapid germination and long daylight hours during which seeding and top-dressing work can be completed – it also has its drawbacks, not least poor survival rates of new plants as a result of them being managed too aggressively while the new seedling is trying to establish, or as a result of cutting heights being reduced too soon.

Cold-seeding addresses this problem by delaying over-seeding until the winter (November to February). UK greenkeepers have been sceptical of this strategy, largely due to the misconception that harsh winter conditions will harm the seed. While it is true that some seed will rot due to the UK’s temperate winter climate, the percentage of seed lost in this manner is less significant than typical seedling mortality rates when over-seeding is carried out at a more traditional timing. It is also worthy of mention that the colder conditions can break the dormancy of fresh seeds by inducing the vernalisation process, thereby giving improved germination rates particularly when using very fresh seedlots of bentgrass.

Cold-seeding: a standalone or complementary strategy?

Cold-seeding can be used either as a standalone tactic whereby all over-seeding work is carried out during the ‘off-season’, or as a complementary ‘little-and-often’ strategy whereby some seed is introduced during the traditional late-August/early-September window and the rest applied in late winter/early spring. This doesn’t necessarily mean using twice as much seed: instead of a single seed application (e.g. at 20g/m2), two lighter overseedings (each 10g/m2) could be applied.

That said, the budget that would previously have been spent on curative fungicides could be used to increase the number of over-seedings in a season and to increase the overall volume of seed applied throughout the year: not only to improve the playability of greens, but also as a proactive disease prevention measure. Afterall, the loss of curative fungicides means that the accumulation of desirable grass species into golf greens is rapidly becoming a necessity rather than an aspiration especially as increasing the population of disease resistant bentgrasses can effectively halt disease outbreaks by creating firebreaks between patches of infected Poa annua.

Applying seed during the cooler months enables a seedbank to build up, with seed already in the ground and ready to germinate as soon as soil temperatures rise. For species such as bentgrasses, which have an in-built period of dormancy after ripening or harvest, cold-seeding can result in excellent germination rates in the early spring. This gives two key advantages:

The use of high-tech drills is not essential to the success of cold-seeding: as long as the seed is distributed evenly into a breach in the soil surface (achieved via micro-coring, tining or groom lines), the seed will vernalise and be ready to germinate when warmer spring conditions arrive.

The winter freeze-thaw process can also help to tuck the seed into the soil. In all cases the key is to ensure there is good seed-to-soil contact and that the seed is sown to the correct depth (2-5mm) so that the new plant can push through the soil surface and put out its first leaf before its energy stores run out.

By over-seeding during the wetter months, cold-seeding is less reliant on irrigation as spring rainfall and residual soil moisture is sufficient to initiate germination once soil temperatures suffice.

All new seedlings will perform better if they are fed properly. Seed applied during the winter will germinate and emerge as new seedlings as soil temperatures rise in the spring. As this will generally coincide when early season fertilisers are being applied, there shouldn’t be a need for any additional nutrient applications to be made. It is worth remembering though that organic or urea-based nitrogen will deliver the best results as these will be taken up evenly and over a longer time period compared to synthetic, fast-release fertilisers. The addition of a seaweed-based soil conditioner (such as Basfoliar Turf Complete) will improve stress tolerance. 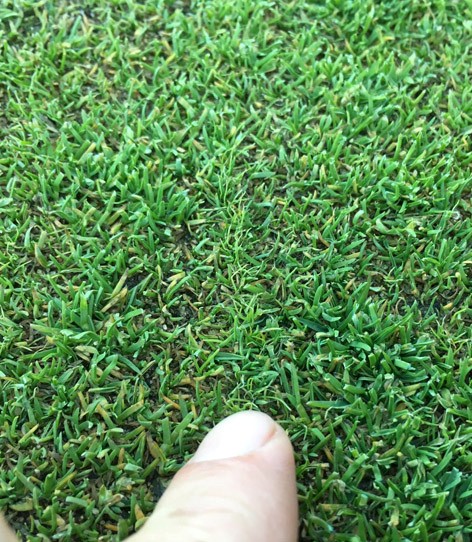 “We disc and dimpled seeded on January 21st and saw the first new seedlings appear as soon as three weeks later. Cold-seeding was very effective, even more so this year given the slightly warmer, settled weather in January. We have been cold-seeding for three years and, despite not using any fungicide in that time, have noticed much less anthracnose in the autumn thanks to reduced sward disturbance in the disease period and stronger, more mature plants being fully established in the sward.”

“We cold-seeded our greens at 5g/m2 using a disc seeder in two directions on 18th February. The first seedlings were visible after eight weeks, and instead of coming through as a lime green colour like they normally would, they were much darker green in colour. We hand-seeded bare areas at the same time and saw new growth just four weeks after sowing. Despite the drilled seed taking longer to establish I was very happy with the results, especially as we had a thick coverage of new growth before the new season got underway.”

“Cold-seeding our greens in November produced new growth in late-February and provided the benefit of allowing the new plants to establish and mature before lowering to spring cutting heights. Fresh growth throughout the spring and into July helped us to keep our greens in the best possible condition.”