Posted on Monday 25 Jun 2018 in Guides & Advice & Sports Pitches
Cricket is played on a surface which is possibly one of the most difficult to maintain. The grasses are subjected to extremes of maintenance with regard to mowing and rolling, both of which greatly reduce the competitive ability of the plants to survive let alone thrive. 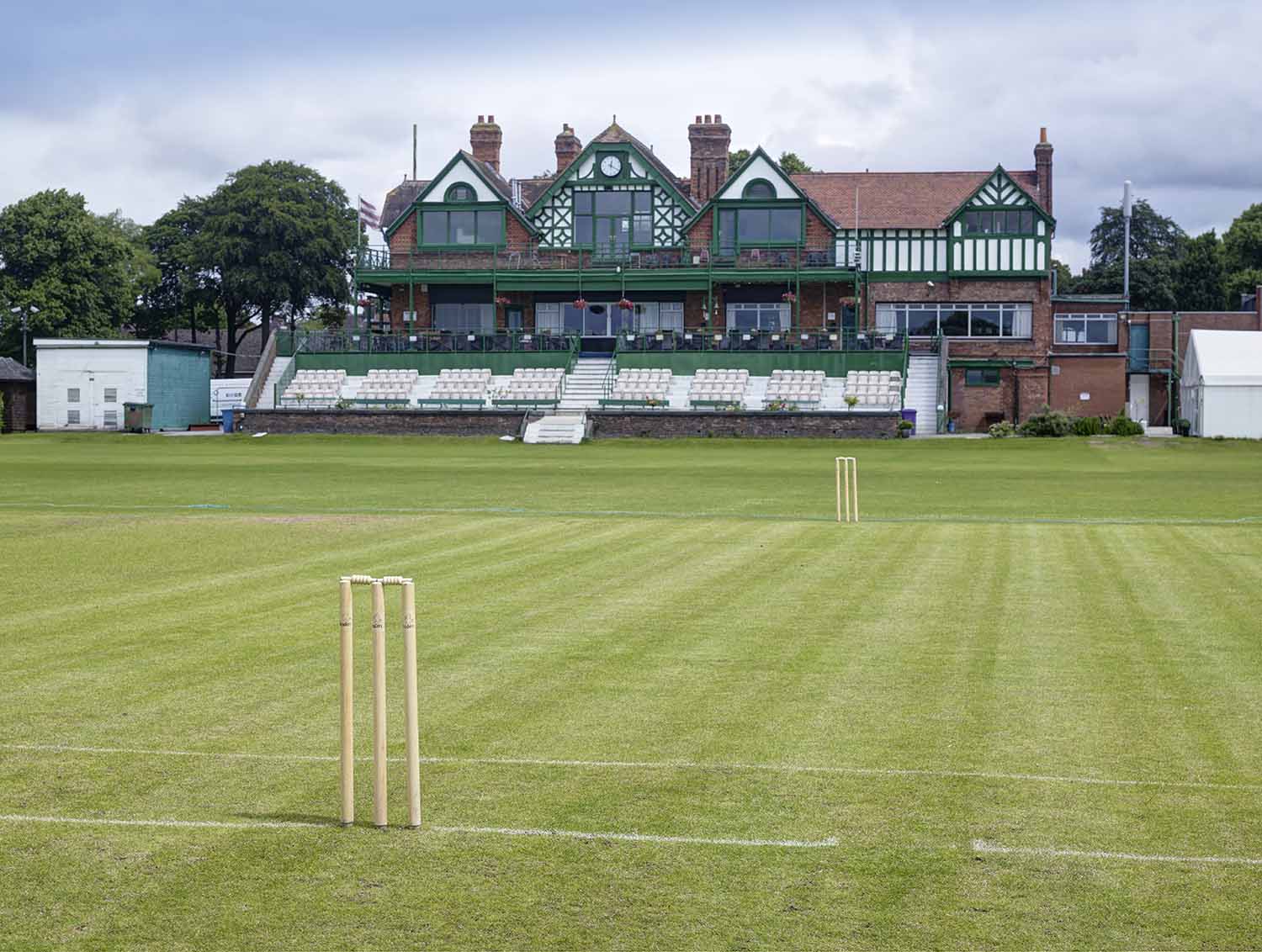 There is also much controversy among cricketers regarding the nature of a true wicket and how it should be prepared. A good pitch should be fast and true and give an even bounce. The final wicket offered to the players should be equally fair to the bowler as well as to the batsman.

Preparation of a good cricket wicket requires careful and thoughtful work on the part of the groundsman. Much of the same management procedures are considered necessary in the preparation of a grass tennis court and, as such, the two will be considered together with the emphasis slightly more on the cricket grass seed and wicket management.

At the end of the summer season, reinstatement work should commence, beginning with thorough scarification of the whole square to remove all fibrous growth that has built up during the summer months. The square should then be thoroughly spiked to a depth of at least 100mm to relieve the compaction and so help the existing roots to regenerate.

If wickets are left unattended, then cricket grasses will struggle to recover with the result that bare areas will be colonised by undesirable annual meadow grass. During the winter months, the grass shoots should be given every encouragement to develop as they will be largely responsible for binding the wicket together during the following season.

Bare areas on the wicket can be cut out and specifically prepared turf carefully inserted. Cricket turf should be laid before the end of October and allowed to settle for two months, after which time it can be top dressed with a dry/heavy loam to true up the surface. Wicket ends should be over-seeded rather than re-turfed as part of the routine in season renovation work. A more uniform and deep-rooted sward will be achieved from cricket grass seed, particularly if the work can be carried out before the end of October.

Using these modern perennial ryegrasses gives the benefit of increased wear tolerance and improved root penetration. It is important to choose a mixture of modern, clean-cutting varieties such as Cabrio or Escapade. If poor quality cultivars are used, they tend to have the disadvantage of ‘crowning’ causing a very uneven surface.

When sowing cricket pitch grass seed at the end of the season, it is important to produce a tilth by using a hand fork or wire rake. After seeding, a thin top dressing of loam can be applied to ensure that the seed is properly covered. It is worth remembering that the amount of progressive renovation work carried out during the summer months will greatly reduce the maintenance needed at the end of the season.

At the start of the spring season, the cricket table benefits from a thorough brushing to remove any debris, followed by a light rolling with a 250kg hand roller to resettle any upheaval caused by frost. If there is any thatch present at the base of the grass sward, then this should be removed by scarifying. The table should then be topped with a mower set at 13mm. On subsequent cuts, the height can gradually be reduced to a desired 6.5mm. Any thin areas should be over-seeded and minor depressions should be top-dressed with dry loam to maintain levels.

There are many different theories regarding the extent of rolling on a cricket square, but generally speaking, a flat roller weighing in the region of 1000kgs should be used in a wicket from March onwards when there is a reasonable amount of moisture in the soil.  The soil needs to be firm and consolidated using the minimum amount of rolling as over-compaction will mean a complete lack of drainage and loss of grass vigour.

A week before the wicket is required for play, it should be scarified to remove any thatch and to generally thin out the grass sward. The aim of the scarification process is to reduce the density of the sward until soil can be seen between the individual blades of grass. The wicket grass should then be mown as closely as possible and, if the surface is dry, a thorough soaking of water may be necessary and any depressions lifted carefully with a fork.

After the water has had time to soak through, the wicket grass should be rolled to consolidate the surface. Ideally, the pitch should be cut every day or at least every other day for the following week and brushed and rolled two or three times depending on the amount of consolidation required. On the morning of the match, the wicket should be given a light rolling to ensure a polished finish and the creases marked out with clear white lines. Individual variations between cricket grounds do exist making the experienced groundsman an indispensable ingredient in good preparation.

Many amateur cricket grounds are maintained by well-meaning volunteers who, unfortunately, cannot give the required time for a full maintenance programme. However, attention to detail will always pay good dividends, particularly on a cricket square.

To assist the cricket wicket to recover, the ground should be thoroughly aerated to offset the heavy rolling which it has received during the week’s preparation for the match. A light dressing of cricket fertiliser should be applied at 35g/m2 to assist recovery of the grass and any footmarks should be repaired by easing the turf with a fork. If over-seeding is necessary, and where quick establishment is required, the seed should be chitted, which entails mixing the seed with damp soil in a bucket encouraging it to germinate prior to use.

The seed should be mixed every day prior to use to maintain adequate aeration. The cricket seed/soil mix should then be spread carefully over thin or bare areas and firmed into the surface. During prolonged summer weather, a damp sack should be used to cover the surface until the seedlings appear. The young seedlings should be kept moist until the roots have taken a firm hold.

This simple method of cricket seeding means that the grass will show through in less than a week, whereas if the seed was to be sown in situ it would take at least two weeks to germinate and much valuable time would be lost.

Guidelines for fertiliser inputs on a cricket wicket per hectare per annum: 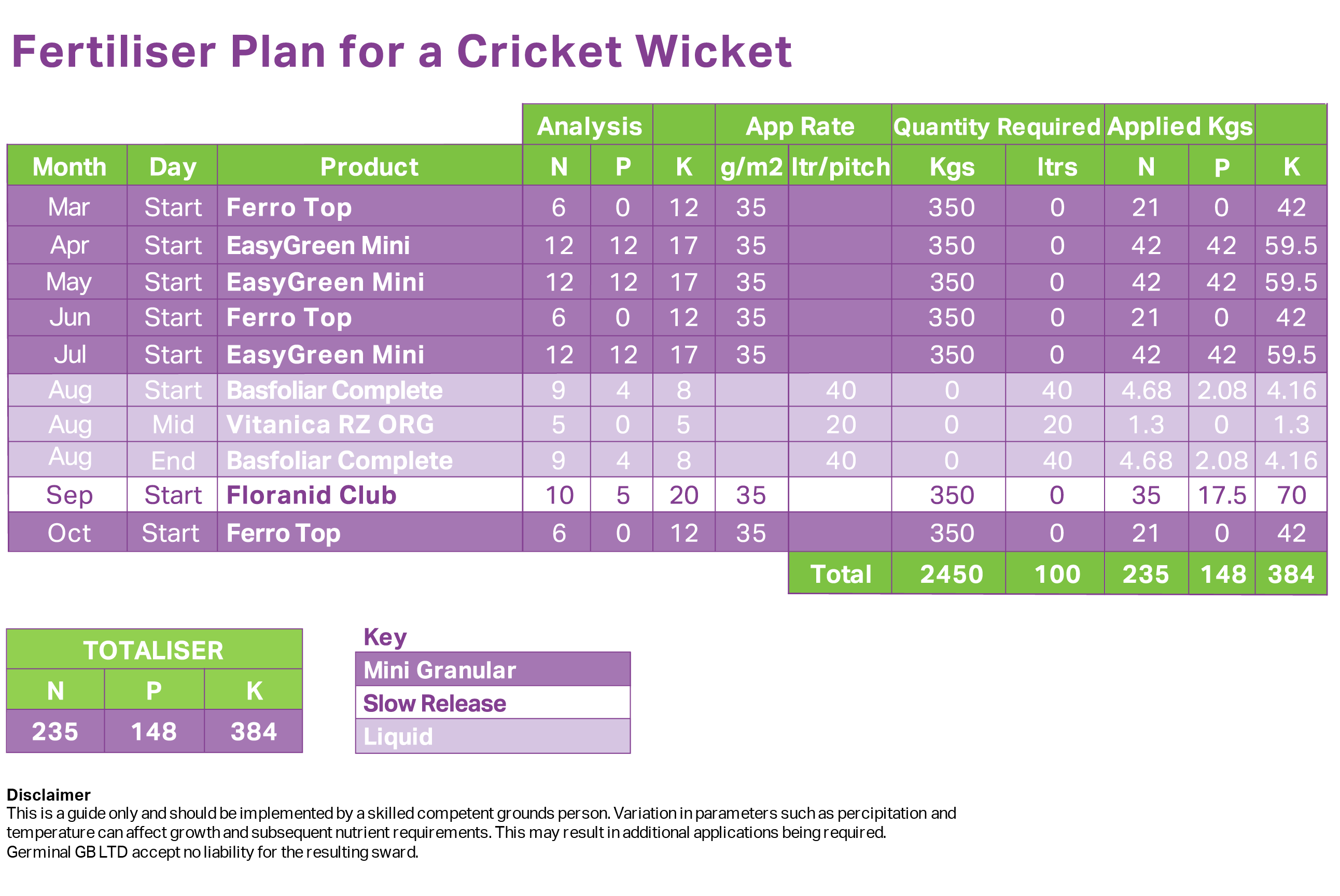 When dealing with local/community winter sports pitches, budget is always of consideration. Any fertilisation in this case is better than none at all. If budget allows for a single fertilisation, a controlled release product such as GSR Tri-Phase should be applied at the time of renovation, April/May time. This will encourage growth and recovery to existing grass coverage, act as a pre-seed fertiliser for any overseeding works, and encourage growth through the close season until teams return in the autumn.

If there is a budget for two feeds, August would be a great time to apply Novatec Premium (15-3-20 plus TE). This will slowly release nutrients throughout the autumn months.

At the start of the summer season, the cricket outfield needs a thorough harrowing to clean out the dead growth followed by a light rolling to leave a relatively flat, smooth surface. A good slow-release fertiliser such as GSR Tri-Phase should be applied at the start of the season at 35g/m2.

If weeds are a problem on the outfield, a weed-killer should be applied when the fertiliser has taken effect and the growth is vigorous. For new cricket outfields, grass seed mixtures using species such as Creeping red fescues, turf-type Perennial ryegrasses, Smooth stalked meadow grasses and Bents should be used. This provides a uniform wear-tolerant sward within a relatively short establishment time.