Posted on Thursday 21 Jun 2018 in Guides & Advice & Wildflowers
Learn how to appropriately manage and maintain wildflower meadows with our expert guides for both spring and autumn sowed seeds.

Many wild flora mixtures soon degenerate into rough grassland within only a few years. This is often the result of poor initial site evaluation, but the most important factor is the lack of maintenance. To date, results from our current trials demonstrate that unmanaged plots achieved far lower percentage mean cover of each flora species 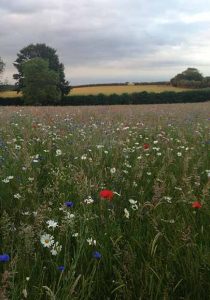 compared with their managed counterparts. This is a clear indication that cutting the sward is a vital component in achieving good results.

For flower-rich habitats to survive and remain stable over a long term period, competition from grasses and problem weeds such as docks and thistles needs to be kept under control. This can be achieved by choosing sites of lower fertility. These support fewer weeds and do not encourage rapid growth of grasses. The stress induced upon grass by mowing will allow the broad leaved wild flora species to compete within a grassland.

Unlike standard amenity grassland, the management of wild flower mixtures is more complex due to the wider range of growth characteristics between species. Factors such as rate of growth and flowering date will all influence the maintenance programme. For example, a cut at the wrong time of the year may result in a plant not producing seed.

This would result in short lived perennial and biennial species being lost from the sward. The survival of certain species relies on a return of seed into the soil to form new plants.

It is essential, particularly in the first twelve months to manage the sward to aid seedling development and maintain a balanced composition from one year to the next. Wild flowers in most cases require a lower maintenance input with a more flexible approach than our traditional amenity grasslands.

Mixtures which have been established during the autumn, for example, are unlikely to require cutting until the following spring. By this time there should be a sufficiently developed sward of companion grasses. This will be growing faster than the flora content of the mixture. To reduce the grass canopy and allow established broad leaved species to develop a cut will be required. The timing of the first cut will depend mainly on the rate of growth of companion grasses.

A rule to follow can be to cut the sward once the height exceeds 10cm (late March/early April) reducing the height to between 4-7cm according to evenness of the ground. The lower the cutting height, the slower the re-growth of grasses.

A second cut could be required if re-growth exceeds 10cm by the end of April/early May. This will be very much influenced by local growing conditions such as rainfall and ground temperatures. The greatest influence will be soil fertility. Subsoil may not require any more than one cut in comparison to a fertile site, which may need 3-4 cuts during the first year.

Mixtures Containing Perennial Species Only (e.g RE1, RE2)

100% Cornfield Annual mixtures such as WF10 do not require maintenance. The following maintenance schedule is for combined Annual and Perennial mixtures.

A 100% Cornfield Annual sowing will not last for more than one year. Reseeding must be done to give an annual display. After several years of reseeding, a seed bank will have built up in the soil and simple soil disturbance in early spring will be sufficient to regenerate the flowers every year.