Posted on Monday 25 Jun 2018 in Guides & Advice & Sports Pitches
While racecourses may not receive prolonged and intensive wear throughout the year, it is significant to note that the action of the horses galloping can exert extreme downward force, especially in the landing area of fences.

This wear is intense during use, during inclement weather or under waterlogged conditions. One of the major problems for the course groundsman therefore is the quick relief of localised compaction.

The specific requirement of a race-track is to provide a uniform surface from the starting gate to the winning post. It is of major importance that effective restoration of the turf after a race meeting is achieved if the required hard-wearing resilient turf is to be maintained. The ideal is to create a resilient, springy turf such as that found growing naturally on heathland and downland as found around Ascot and Newmarket.

Harrowing is recommended in early spring to help lift any excess growth prior to topping with gang mowers. Thorough spiking to open up the surface and assist in surface water drainage will also help to encourage deeper root penetration. The application of spring fertiliser during late March or early April, depending on the weather conditions, also aids in thickening the sward.

During the summer months a further application of fertiliser may be necessary depending on the condition of the turf. However, the application of too much nitrogen should be avoided otherwise soft lush growth will occur. Slightly acidic conditions will help with the formation of some fibre and at the same time discourage weeds. The grass should never be allowed to grow too tall but kept mown regularly at a height of 100mm so as to encourage the grass to fill out and so improve the general density of the sward.

Immediately following a race meeting the track should be thoroughly spiked to help relieve surface compaction and the localised use of hand forking is advised in obviously compacted spots. Large divots which have been kicked, together with smaller scars, should be surface dressed with a mixture of topsoil and seed to produce a true level.

In the past many racecourses have paid insufficient attention to the grasses contained in the seed mixture and inferior agricultural ley mixtures have been used. In recent years plant breeders have developed new and much improved varieties of turf type perennial ryegrasses, which give a far superior performance over the old varieties. These hard-wearing grasses can be relied upon for rapid establishment and will produce a compact and dense sward. They also require less cutting because of their natural shorter leaf length.

Modern ryegrass varieties are compact and have a high tillering capacity, and are well proven for their wear tolerance and disease resistance. In cases where rapid establishment is required, ryegrasses alone may be used for over-seeding. If, however, a wiry, resilient turf is required, the following mixture should be used:

Most racecourses will eventually exhibit signs of severe wear. When this happens, tufted grasses will begin to invade bare patches. Under such conditions, thought should be given to a general over-seeding programme of the offending areas using a “sod” seeder to tilth and seed in a single operation.

Seed can be sown with success from early March through to mid-October.

National Hunt courses have to be prepared in the spring, while a certain amount of progressive renovation work should be done throughout the summer months during the flat season. To reduce wear the tracks and fences should be repositioned where possible to allow for natural recovery as well as speedier establishment of the renovated areas. To protect take-offs and landings at jumps from severe frost in winter, a thick layer of hay/straw should be applied two or three days before the meeting. This helps to prevent deep penetration of frost. 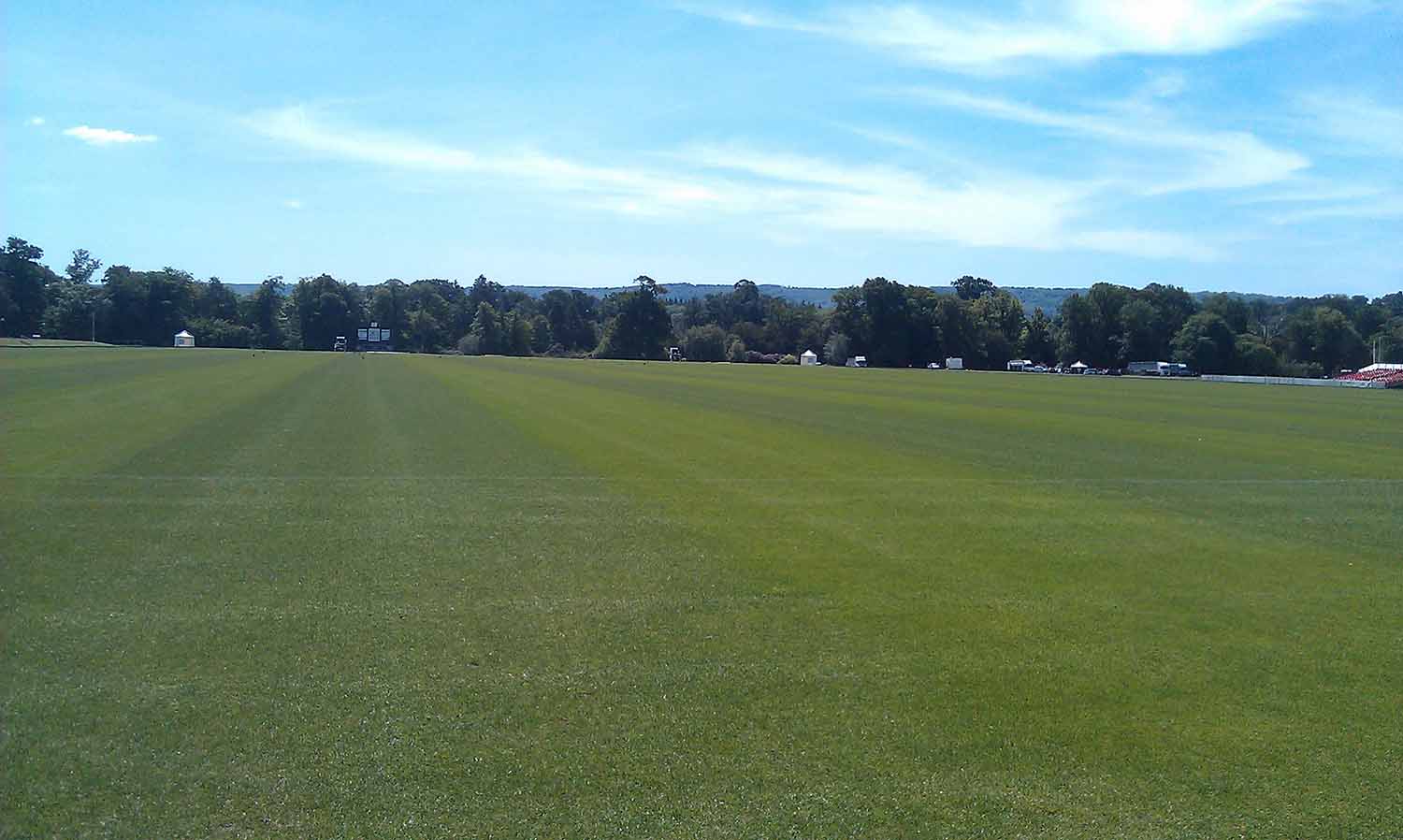 All top dressing needs to be applied evenly in order to avoid smothering the existing sward. With this is mind, materials are best applied while there is vigorous grass growth so that new foliage may quickly grow through the top dressing. A good quality, screened loam should be used and applied in dry conditions. Top dressings are most effective when keyed onto the surface: this can be achieved by spiking and forking before and after application or for larger areas, a light harrowing or drag matting.

As for all sports turf, regular spiking is an important operation which is too often overlooked. As stated earlier, spiking helps drainage and relieves compaction and is an important prerequisite to top dressing. Time spent spiking to aid root development is never wasted. The deeper the root penetration the stronger and more drought resistant the turf will be.

While rolling is an important process in the production of a smooth surface, it should always be kept to a minimum . A heavy roller should never be used and a light Cambridge Ring Roller is best for most race tracks. The ground should never be rolled in wet weather as this will only seal the surface and impede drainage.

Generally speaking, a broad spectrum weed-killer will eradicate many of the more common weeds. Timing is important and the summer growing season should be selected when both the grasses and weeds are growing strongly. Great care should be taken to follow the manufacturer’s application instructions and recommended dosage rates.

One of the desirable requirements of any turf is good drainage and this particularly applies to National Hunt meetings that are held during the winter. While the cost of installing land drains may be considerable, one can also argue that the cost of losing a day’s racing can be equally expensive. The cost factor may prohibit the introduction of a full pipe drainage system, but such work can be carried out on a progressive basis, selecting the worst areas first and adding to the system as time and finance allows.

During the winter months a careful note should be made of the location of particularly wet areas, so that suitable drains can be installed in these areas during the summer.

Several racecourses have installed full irrigation systems, as moisture levels affect both the growth and the strength of the turf. Too much irrigation in the summer months can produce a lush, soft top growth which should obviously be avoided. A close watch on the weather is needed to prevent over-watering, otherwise the going will be too soft and the track will be at risk of excessive damage.