Posted on Tuesday 9 Aug 2022 in Guides & Advice & Wildflowers
In an ideal world, all wildflower seed should be sown into clean, weed-free ground.

With time and patience, however, sowing wildflowers into grass is also possible.

Can you sow wildflower seeds into grass?

Yes – mixtures of 100% perennial and/or annual wildflower species can be sown into existing grass. However, you need to know that competition from the existing grass sward will be fierce.

As such, the sward needs to be degraded as much as possible. You can achieve this by vigorously scarifying the area with a purpose-built scarifier or verticutters.

For larger areas, a chain harrow is perfect or else a power rake. The aim is to degrade the existing sward and remove as much thatch as possible to expose the soil to sunlight, air and moisture. This will make a mess, but don’t worry – that’s the intention. You need to expose enough soil so that the wildflower seed sown falls in the soil.

Moving forward, you need to check the growth of the existing sward so that it doesn’t swamp any seedlings as they establish. The wildflower seed mixture you sow should ideally contain some Yellow rattle with the other species.

This is an annual species that produces attractive yellow flowers, seeding usually in July. The plant is semi-parasitic, with its roots coming into contact with grassroots and removing nutrients for its own use.

In this way, Yellow rattle can actively stunt and suppress grass growth. It can be used to reduce coarse grass in existing grassland areas and encourage the establishment of other wildflower species over time. 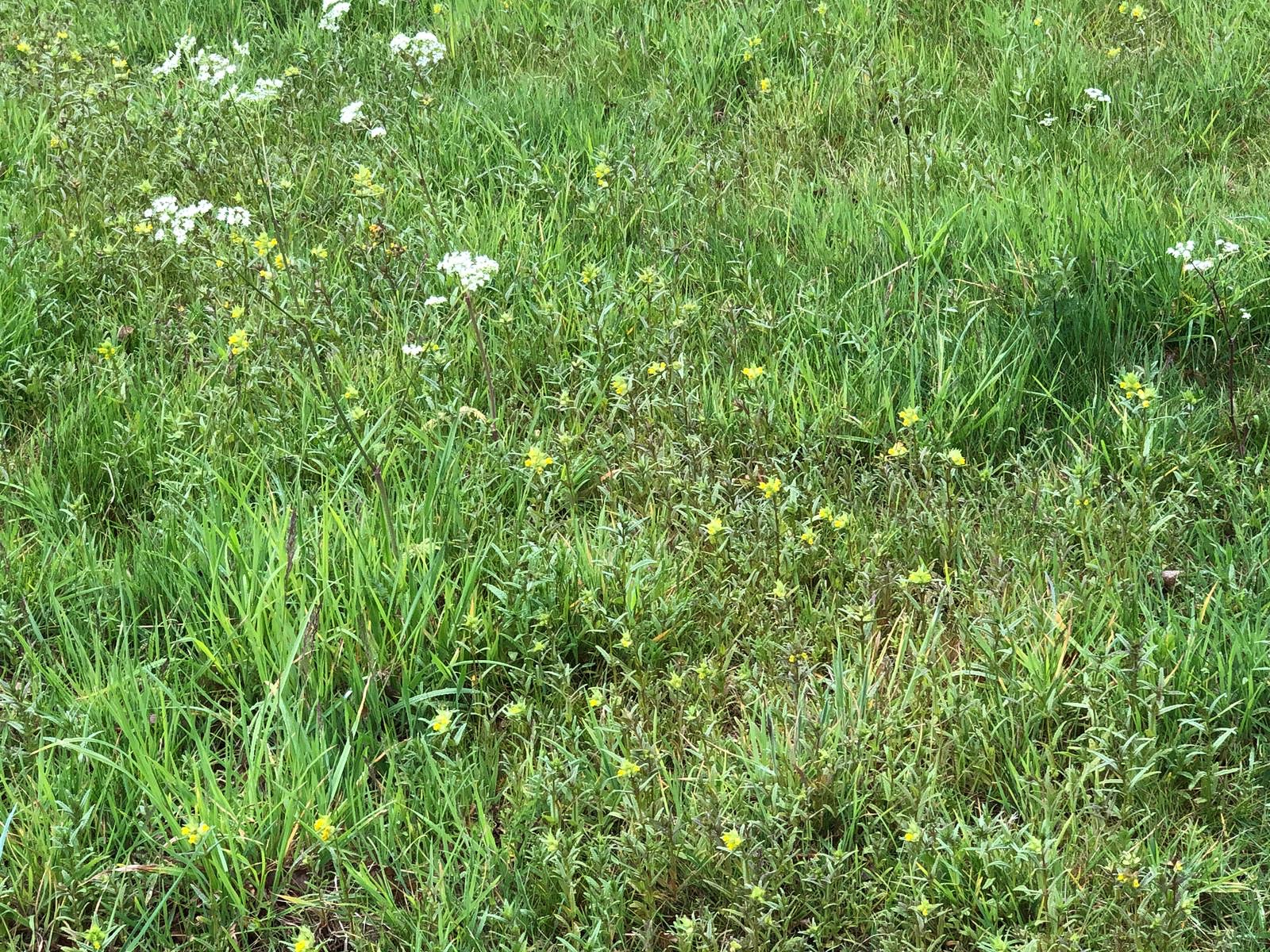 How to sow yellow rattle?

Establishing Yellow rattle seed can take time. In some situations, it works well after just one sowing, while in other situations it can take two or three attempts. This variability from can be attributed to many factors, including the seasonal variation in the germination of that year’s Yellow rattle seed lots.

To give Yellow rattle seed the best chance to germinate and establish, the seedbed needs to be prepared correctly. The main aim is to achieve good seed-to-soil contact.

Mow the existing meadow or grass area aggressively short. This should be down to below 25 mm and remove all the clippings to prevent thatch from forming. You can then follow the scarification instructions mentioned above.

When to sow yellow rattle?

The optimum time for sowing Yellow rattle seed is in autumn. And the perceived wisdom is to sow no later than November because the seed needs a period of cold in the soil to break dormancy – a process known as vernalisation – before it will germinate.

In our experience, we have succeeded sowing Yellow rattle as late as early January. We believe this is due to the seed being stored in cold, dry conditions in a seed store, thus causing partial vernalisation.

We also believe this helps the Yellow rattle included in our wildflower meadow seed mixtures, such as RE1 Traditional Hay Meadow, when sown in spring.

Being an annual, Yellow rattle needs to be allowed to seed every year before cutting. Therefore, it is important to note that wildflower meadows with Yellow rattle should not be cut until after July. If cut or grazed before it seeds, the species will be absent from the meadow in the following year.

A scrape is an area where the ground is disturbed, and wildflower seeds are sown. The top layer of turf is scraped off and the soil underneath is worked into a tilth and a new wildflower seed mix is sown.

Alternatively, you can rotovate a strip or area and sow new seed. The areas around the scrape can be managed in any way depending on the desired effect.

When sowing wildflower seeds into grass, if you want the area to spread, it is recommended to keep the surrounding grass tidy but not intensively mown.

The recommended mowing management for the area surrounding the scrape should be four to six cuts a year down to 40-70 mm. Each time, you should aim to create some soil disturbance by scarifying.

This stops the surrounding sward from becoming too thick or tight and allows the spread of perennial wildflower species, as well as creating an environment for new seeds to germinate. This disturbance is especially important in late summer and autumn. When overseeding wildflowers, please manage the area according to the mixture advice provided in our guide on maintenance and cutting.

Plug plants can also be used to introduce wildflower species into grassland, ideally with the inclusion of Yellow rattle. These plants are raised in trays of between 150-200 small plants with a typical planting rate of 6-15 plants/m² depending on budget.

The best season for planting plugs is autumn, as there is less chance of the newly planted plugs being subjected to prolonged dry weather while establishing. Before planting, you should mow the area down to approximately 25 mm and take steps to scarify the sward as described earlier.

The root system can develop over winter, leaving the plant well equipped to face competition from the growing grass in the spring. Early spring planting is also acceptable, but remember to water the plants in well and ensure they aren’t swamped by the more aggressive grass plants. Planting in late spring or summer should be avoided unless substantial spot irrigation can be administered.

If you need advice on sowing wildflowers into grass, including seed quantities, then please talk to our grass and wildflower experts.