When creating a wildflower area from bare ground it is important that we get the correct balance of mixture. As the wildflowers can take varying amounts of time to establish depending on species our mixture must include something that will establish to protect the bare ground from air and soil borne weed invasion and erosion, but will also not be vigorous enough to hinder the future establishment of our wildflowers.

Such a mixture is called a “nurse crop” and usually takes the form of an open growing non-competitive grass seed mixture. Given the correct future maintenance, this nurse crop will gradually form a smaller and smaller contingent of the sward, being replaced by the wildflowers as they establish and mature.

If, however, the seed is being sown on a small area, perhaps in a garden where weed control will not be a problem as it can be carried out manually, then the cover crop can be omitted. 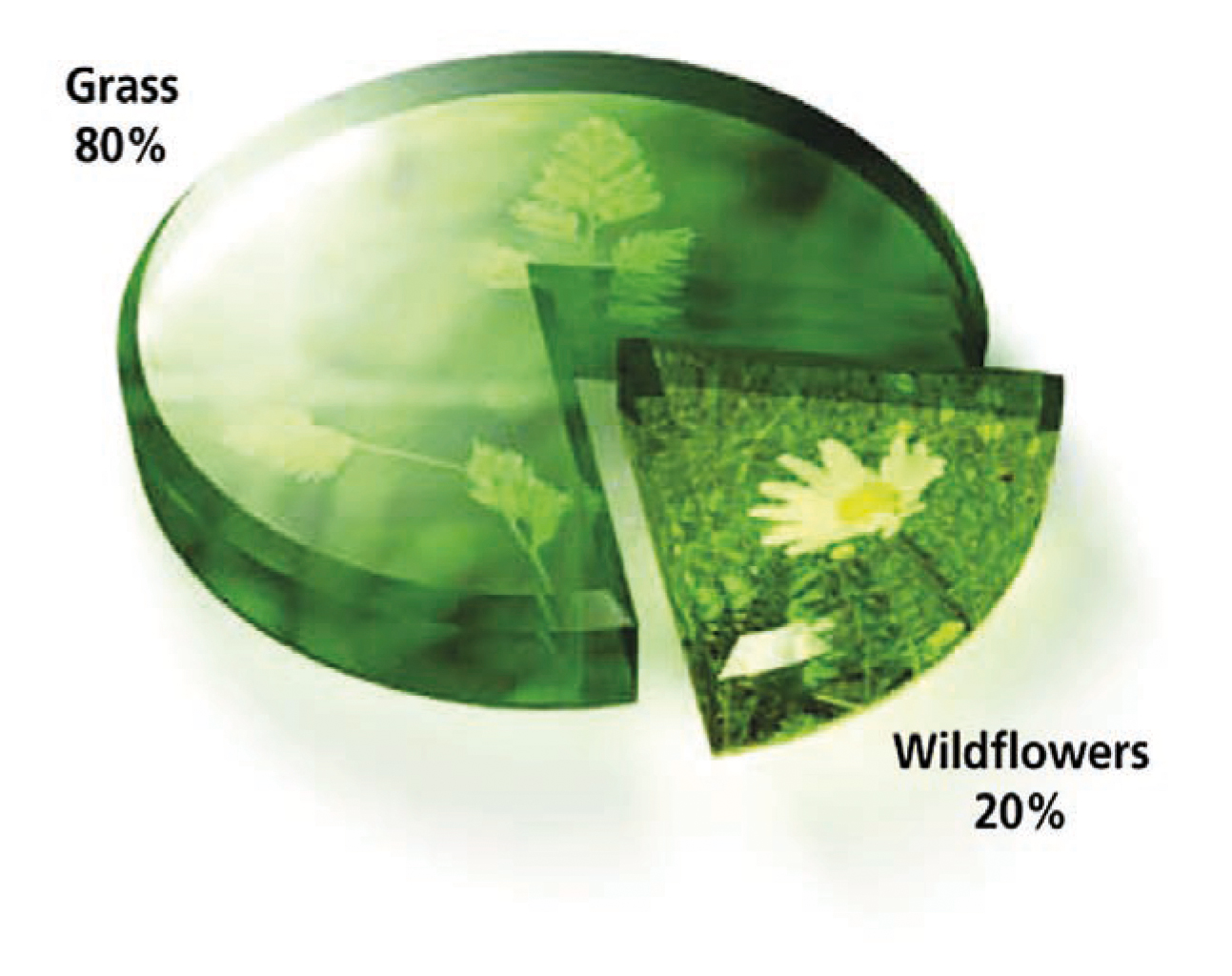 The seeds in your mixture will probably have originated from a wild flower production field. This seed will have been multiplied in single species plots from seed sourced in the wild. This is normally sourced from areas of ancient grassland or Sites of Special Scientific Interest (SSSI) with the permission from landowners or site protection agencies. From seeding to harvesting it can take two growing seasons before a seed crop is produced. Once harvested, the seed is cleaned in order to remove the inert matter and provide high purity seed. Some species such as Medicago lupilina (Black medick) or Anthylis vulneria (Kidney vetch) will also need “pummelling” in order to remove seeds from the pods. Producing seed in this way ensures mixtures contain only pure seed, and not large quantities of worthless chaff. Only two harvests are taken from each field to ensure the resulting seed is never more than two generations away from its natural genotype

Reputable seed houses have a standard range of ready-to sow wildflower mixtures suited to different soil types and habitats. For example, acidic soils or shaded areas. The specific composition is determined by habitat and location.

This is what Germinal have based their ‘RE’ range on and the product is formulated by seed numbers not weights. The ‘RE’ range from Germinal is a range of mixtures based on naturally occurring plant communities. These communities were surveyed by the National Vegetation survey from 1976 to 1979 as outlined in the “British Plant Communities” by J S Rodwell and classified by grassland type. These different classifications are the basis of the RE mixture range.

You may of course formulate your own wildflower mixture, quoting species as a percentage by weight. Be aware that some species are only available in small quantities and can be very expensive. A reputable seed house will be able to advise you on creating a mixture, which is realistic for the job in hand and financially sensible. Remember your nurse crop though. Keep the proportions of the mixture balanced. (80% by weight nurse crop: 20% wildflowers) to prevent weed invasion without suppressing the wildflower establishment.

In most cases, wildflower mixtures should be sown at 5g/m2. Given the usual make up of a wildflower mixture this equates to 4g/m2 of noncompetitive grass mixture (nurse crop) with 1g/m2 of wild flowers. It is tempting to increase the sowing rate or aid more rapid stabilisation. Unfortunately, this will only encourage the grass cover crop to dominate the sward and inhibit wildflower establishment. Wildflower mixtures are about striking a balance between the nurse crop and the flower seed and this should not really be altered unless unusual site conditions exist.

In some extreme cases such as on steep slopes where rapid stabilisation is required, we have no option but to employ a system that will provide almost instant stability. In terms of wildflower mixtures there are several options open to you. Firstly, you can use an artificial matting which is bought impregnated with the seed and fastened to the steep bank. Other options include different types of ‘cellular’ soil holding mats which can be sown directly onto the surface or in other cases ‘hydra-seeding’, a process where seed is sprayed onto the bank in a liquid adhesive carrier. All these options of course mean a cost implication, but there is a more natural alternative. Within the wildflower seed mixture a cover crop of wheat or barley can be used. Depending on the variety, these will grow to approximately 600 to 900m tall and if sown correctly will allow the wildflower mixture to establish beneath them. The resulting cereal crop should be mown away to leave the developing grass/wildflower meadow to fend for itself before the cereal crop comes into seed.

Generally speaking wildflower mixtures can be sown all year round. 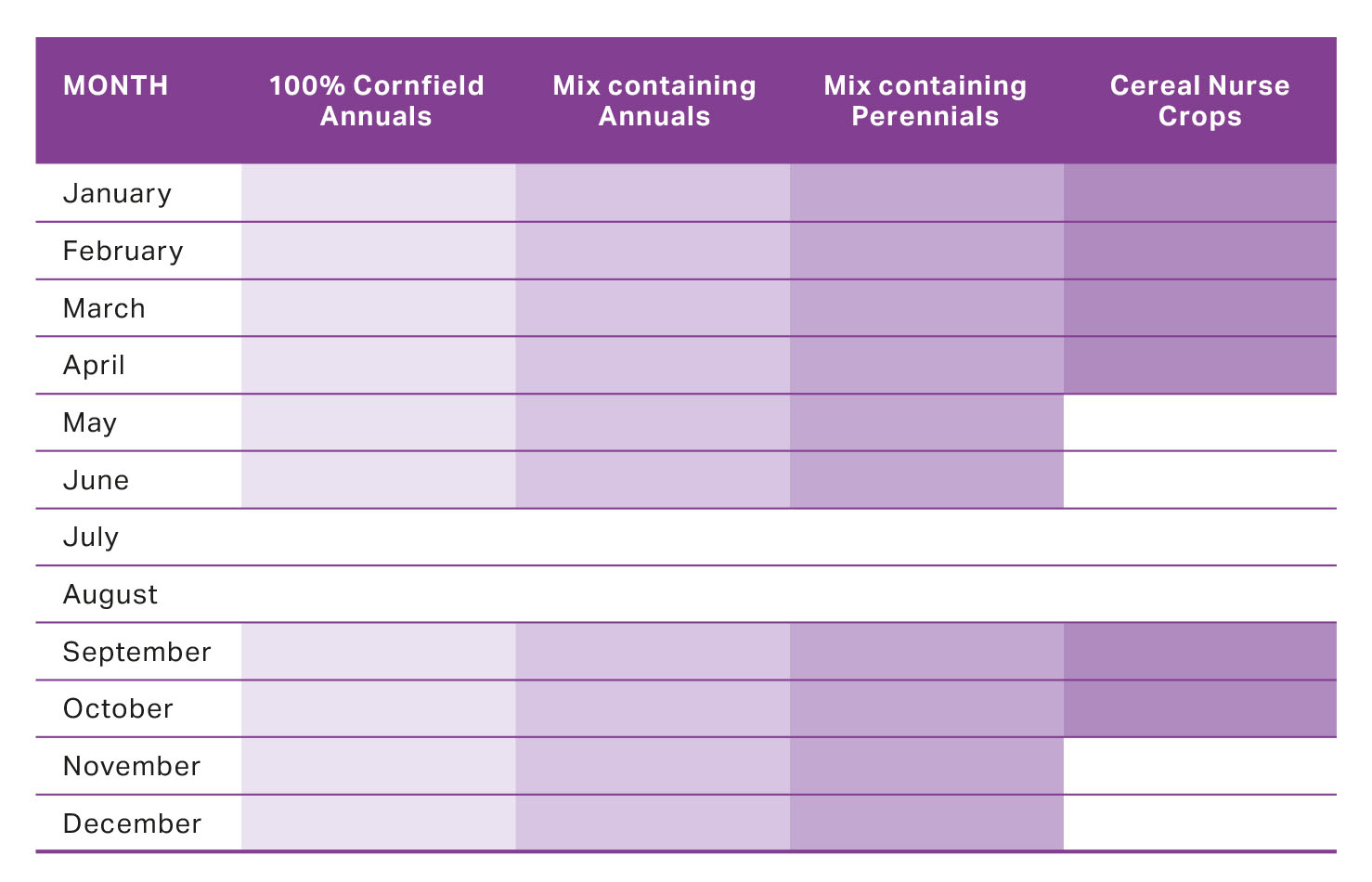 Many species exhibit a natural dormancy which prevents them from germinating in the wrong conditions. For example, grass seed has a very low dormancy, easily broken by moisture and warmth, which triggers germination. Wildflowers are designed to protect their seed embryo and have been known to have germinated tens of years after seeding once they have been exposed to moisture and warmth. A natural survival mechanism!

Types of dormancy in wild flora:

Generally speaking there are 3 types of dormancy:

These species have a tough seed coat that prevents water penetrating. The coat is naturally broken down with time spent in the soil. Sow from spring to autumn/winter for flowering the following summer.

These species require what is known as ‘stratification’. The dormancy is broken after exposure to sustained low temperatures. In the wild this occurs over winter. Sow in the spring through to late autumn for flowering the following summer. If you are sowing small areas of a single species you can artificially break the dormancy of the seeds.

Scarification can be carried out by rubbing the seed carefully in coarse sandpaper. This allows moisture to penetrate the seed coat to facilitate germination.

The seeds can be mixed with moist compost and placed in the fridge for about 6-8 weeks at 2°C. Ideally, sow in spring for flowering in the summer. 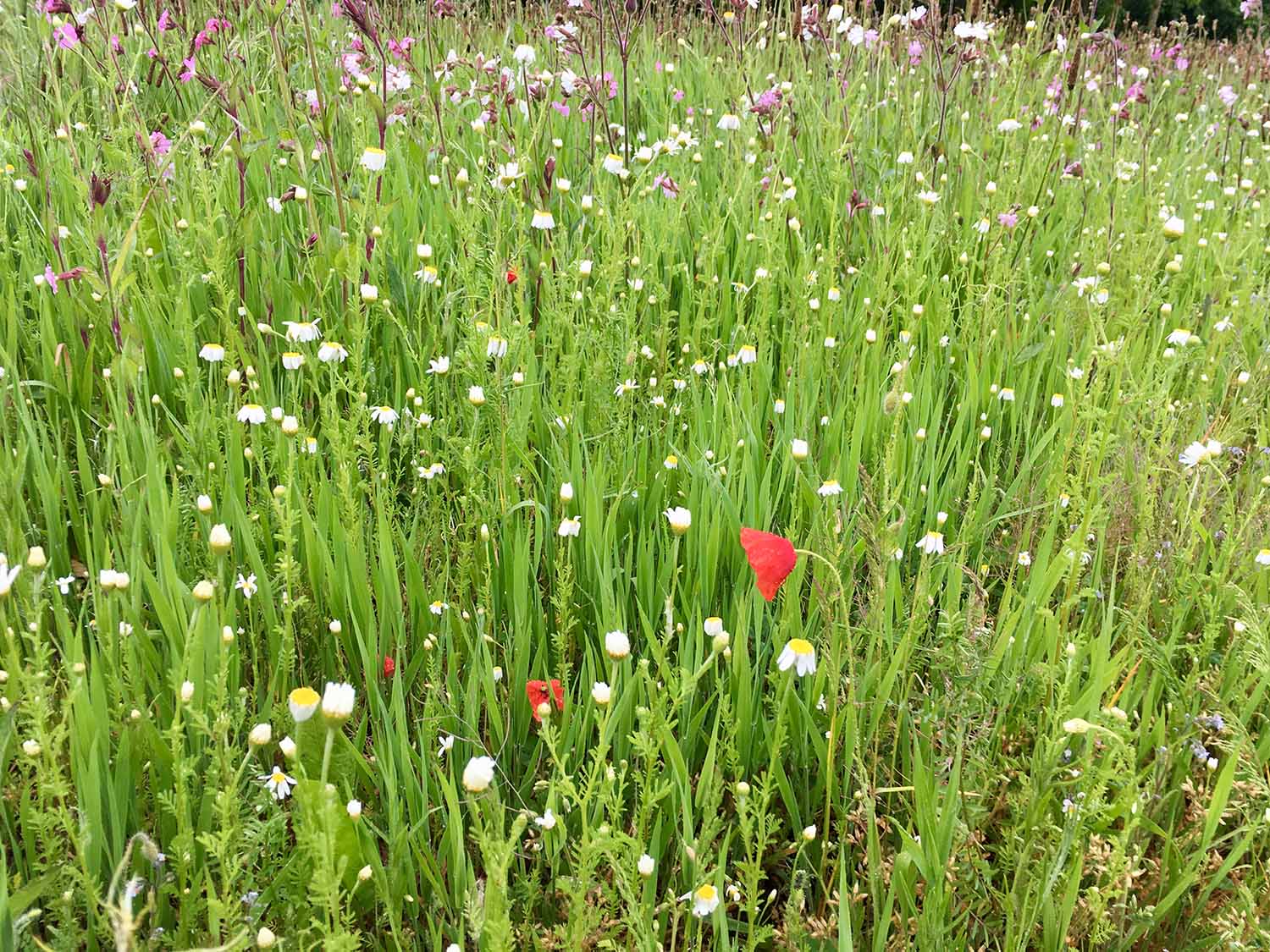 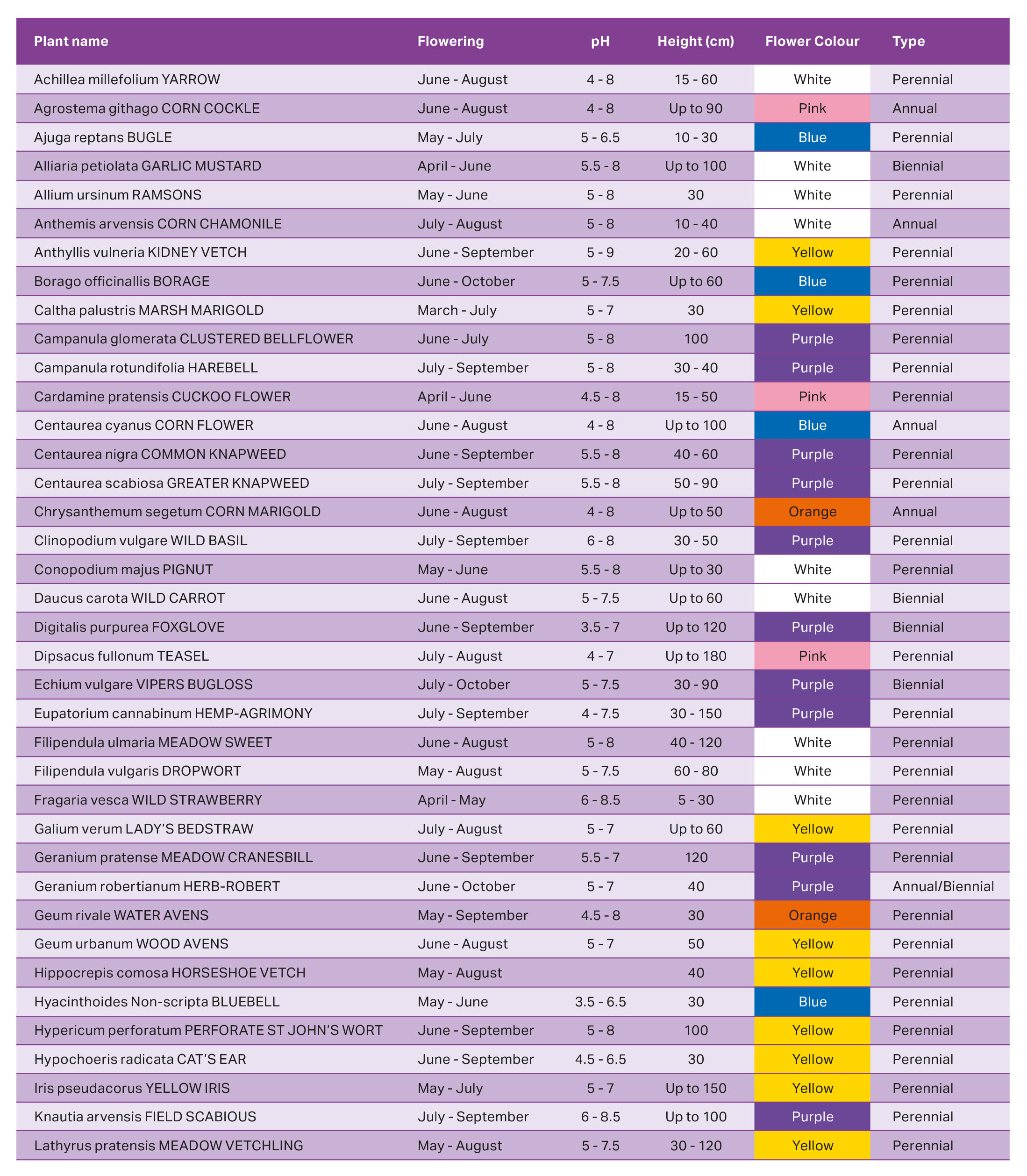 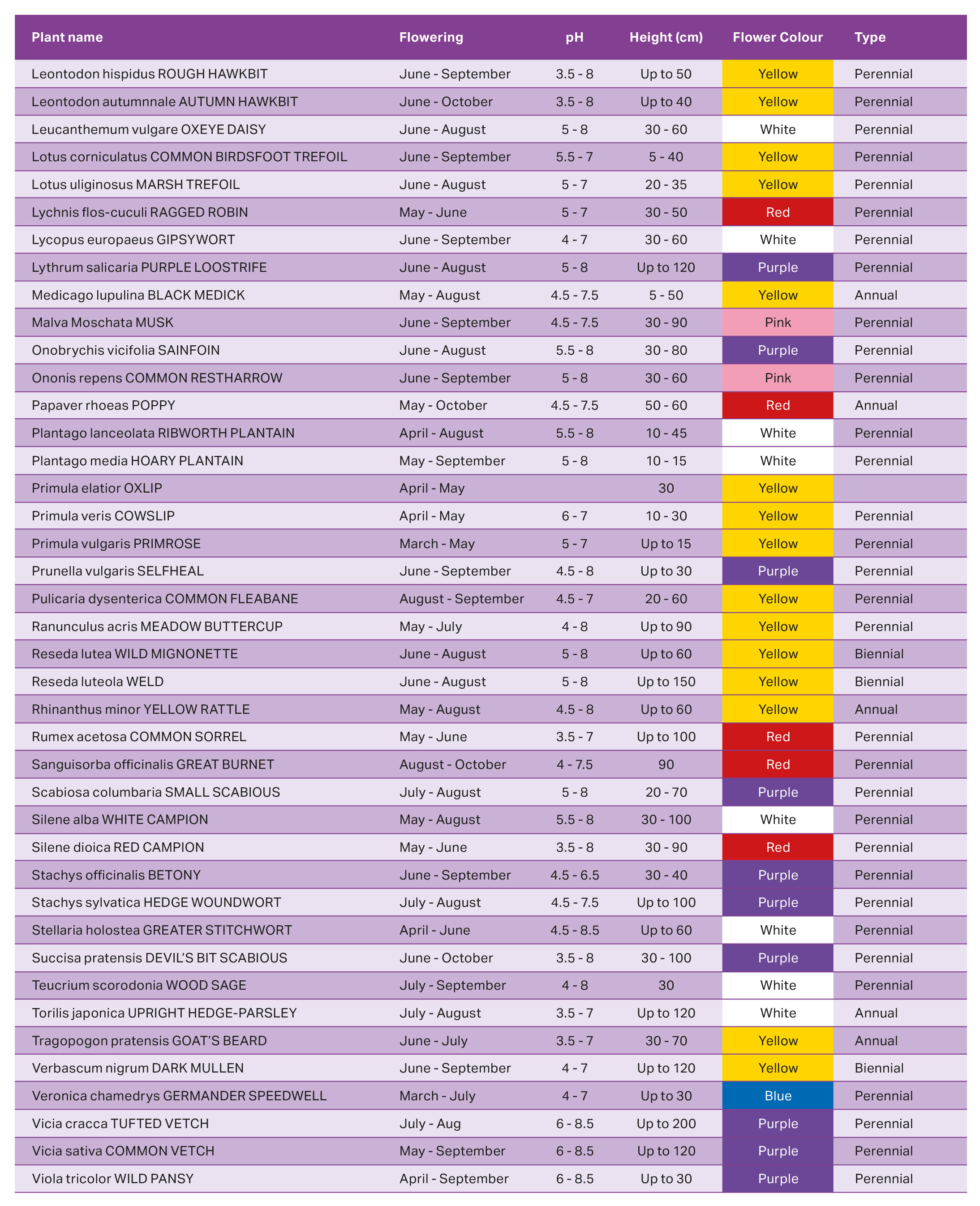