Posted on Tuesday 13 Apr 2021 in News & Latest News
After severe waterlogging caused five fixtures to be cancelled during the 2016-17 season, the soil-based pitch at Accrington Stanley FC’s Wham Stadium was reconstructed to improve drainage and ensure year-round playability. But it is the pitch’s ongoing fertiliser and maintenance regime which have given head groundsman Martyn Cook the confidence that his pitch has the requisite attributes to remain in good condition season after season. 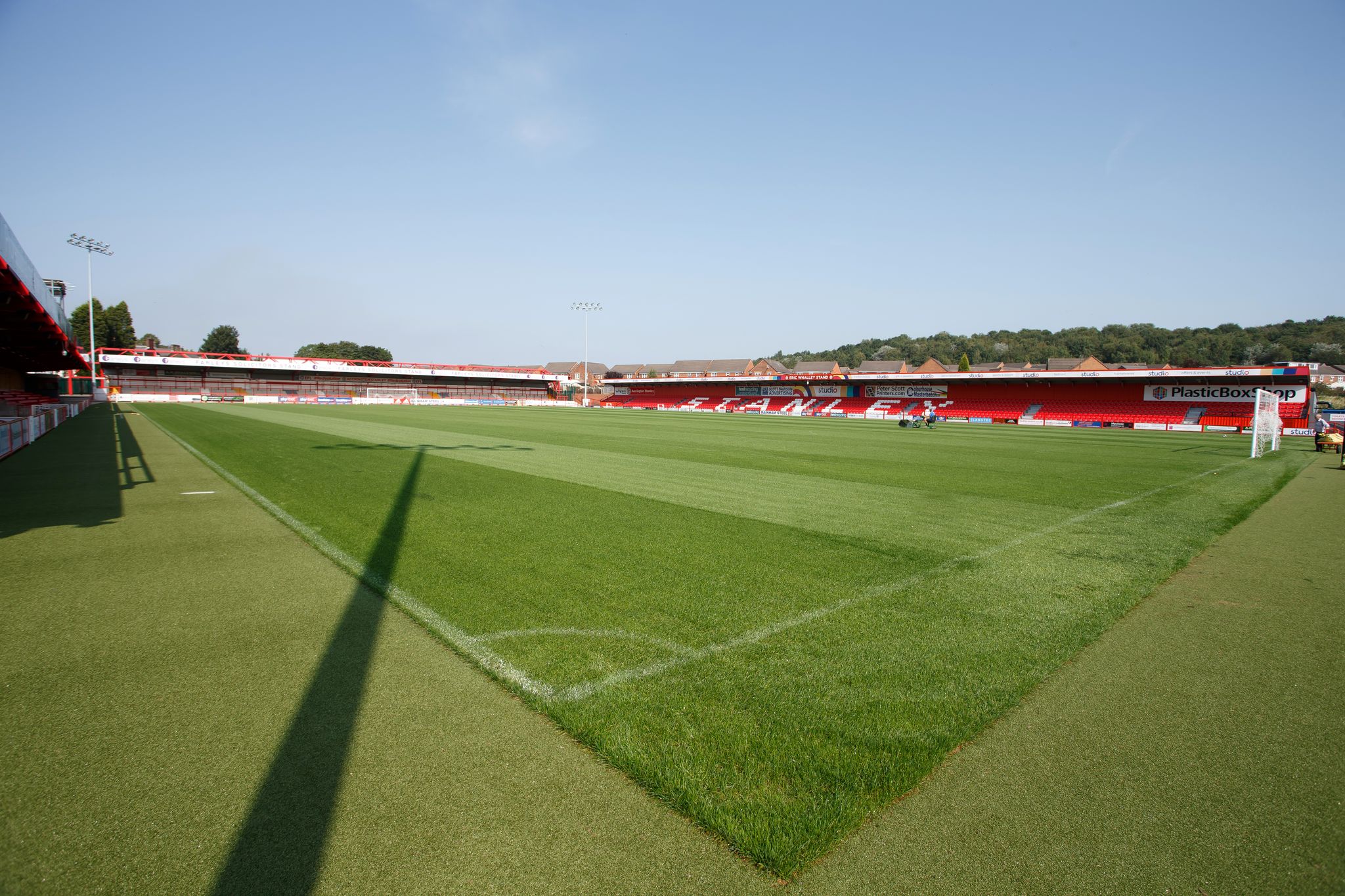 Martyn Cook has looked after Accrington Stanley’s Livingstone Road pitch for the past 14 years, during which time he’s battled against severe waterlogging as a result of the field’s soil-based construction. During the 2016-17 season things had got so bad that a total of five matches had to be cancelled: at the time the club was in League Two, but its promotion to League One in April 2018 meant a re-think was needed to ensure minimal disruption to the following season’s fixture list.

The pitch was therefore reconstructed in May 2019 by Danvic Turf Care who installed a gravel raft pitch with rootzone and conventional lateral drains and a new sprinkler system. The pitch was seeded using Germinal’s A20 Premier Ryesport mixture (a blend of four high quality perennial ryegrass cultivars). Paul Moreton of Germinal also devised a FACTS (Fertiliser Advisers Certification and Training Scheme) approved fertiliser plan for the new pitch’s grow-in period.

“The new pitch established very quickly despite being seeded six weeks later than usual,” Martyn explains. “I was watering the pitch up to four times a day during that summer’s warmer spells, but we also saw a decent amount of rainfall which helped immensely in allowing the newly established seedlings to grow away rapidly. It grew so quickly in fact that its first cut (at 45mm) was done just 14 days after seeding, after which I gradually reduced the cutting height by 3mm week on week until the start of the season.”

With the new sward safely established and the new season underway, Martyn worked with a third-party consultant who recommended a liquid based fertiliser programme to feed the pitch during the autumn and into the following year.

“To be honest, it was a bit of a disaster,” Martyn explains. “I’m a team of one with a very limited amount of machinery and no grow lights or undersoil pitch heating at my disposal, so I rely heavily on contractors to do anything other the most basic of day-to-day operations. That meant it was tricky trying to ensure the pitch was fed at the right time, and as it turned out, the liquid programme simply wasn’t robust enough for the hungry new sward. We were also losing a lot of nutrients to leaching during periods of intense rainfall – something we can get a lot of in Lancashire – and as a result the sward was suffering.

“I therefore contacted Paul Moreton to see what he recommended, and he subsequently devised a bespoke fertiliser programme based on the pitch’s current nutrient requirements and soil analysis results.” 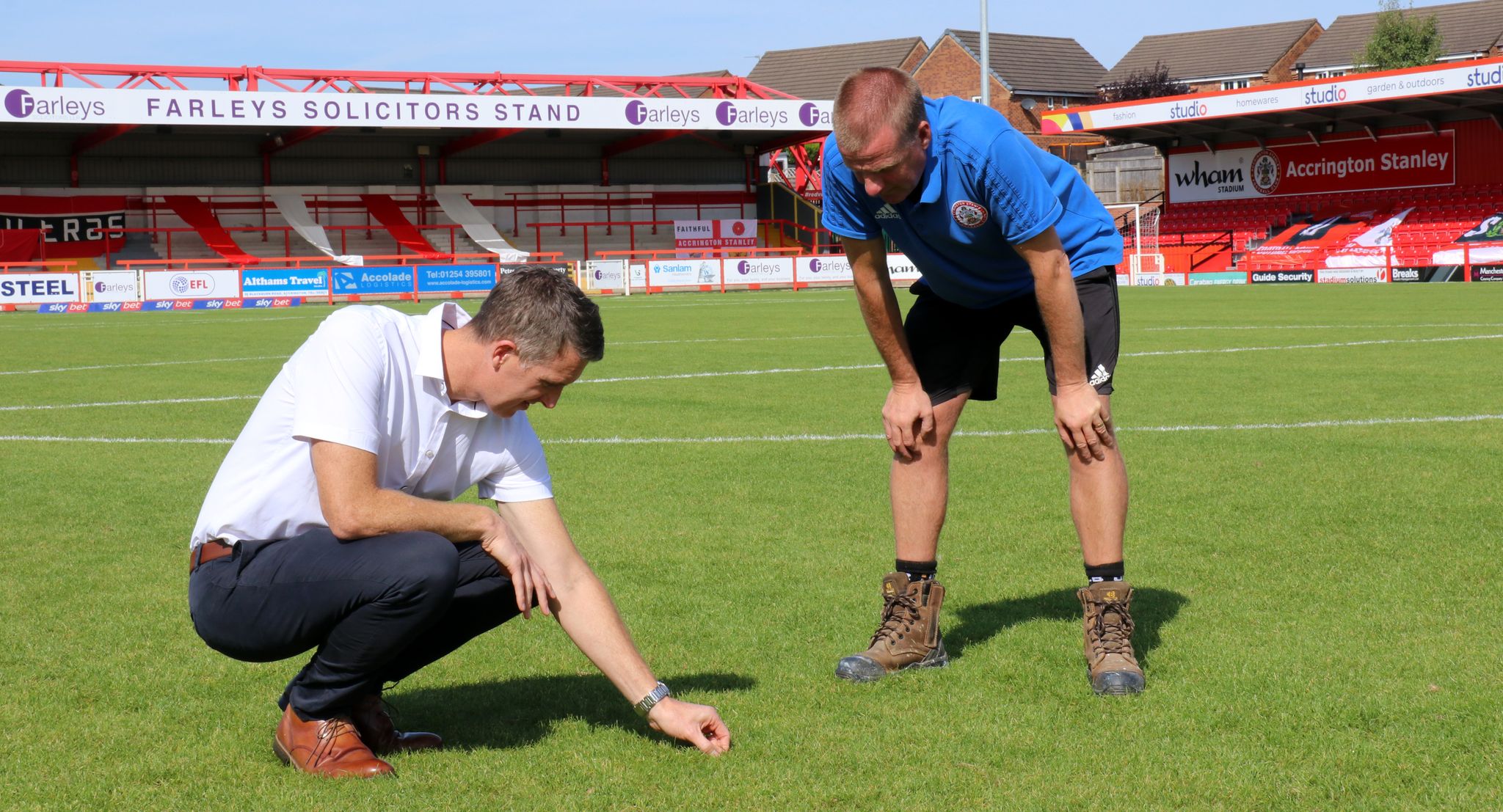 The new fertiliser plan uses a selection of Germinal’s slow release granular fertilisers which provide 90% of the sward’s nutrients, with the remaining 10% being supplied by intermediary liquid feeds.

“I can apply the granular feeds myself with a pedestrian spreader that Paul supplied and only need to get outside help whenever a top-up liquid feed is needed,” Martyn continues. “That means I can apply the majority of nutrients as and when the pitch needs them and, on average, I’m making an application every four weeks or so.”

“We’re not applying any nitrogen in December, January or February,” Paul Moreton adds, “because it’s too cold during those months for nitrogen to have any benefit especially without any soil heating or lights.  To achieve a healthy winter sward we need to use a variety of slow-release granular and liquid fertilisers to supply nitrogen in a variety of forms when the sward is actively growing and only apply a slow release potassium-based feed during the coldest winter months to keep the sward strong, healthy and disease free. We also don’t apply any chemicals – not even growth regulators – so it’s a pure NPK programme.”

Despite the successful pitch rebuild, Martyn still faces one major headache in terms of keeping the pitch in tip-top condition: one of the goalmouths still struggles with poor grass growth.

“In essence I think it’s due to a pocket of cooler air which affects that part of the stadium,” Paul Moreton continues. “With around 35 home games, plus regular training sessions being hosted on the pitch, it’s not surprising there’s a lot of wear and tear in the goalmouths. I think the solution is to use growth lights which would overcome the lower air and soil temperature and help the sward to recover more readily, but it all comes down to budget.”

A new training facility is being developed away from the Wham Stadium, but until that is up and running, Martyn needs to balance the pitch’s needs against a heavy fixture list and training requirements.

“During the peak of the summer and autumn I’m cutting the grass every day, with a verti-cut also done every fourth week,” Martyn explains. “I also brush the pitch on a fortnightly basis to remove any debris. That simple regime – plus the new fertiliser programme – allowed the pitch to perform better than ever last season, despite the excessively wet winter which saw so many rainfall records being broken. In fact, only one game was affected by adverse weather last season, with a match against Sunderland having to be called off after 72 minutes because of an immense downpour which would have made it difficult for any pitch to cope.”

Since the end of the season, the coronavirus pandemic has taken its toll on the club’s income, but the club has continued to invest in the upkeep of the pitch: “We continued to feed and water the pitch throughout lockdown,” Martyn describes, “but unfortunately we didn’t have the budget or resources to carry out our normal post-season renovations. As a result of the pitch being heavily used for training the sward is starting to suffer again, but, it’s still in fairly good condition. It will certainly be a challenge to keep it that way if we get another excessively wet winter, but thanks to Paul’s expert advice and the efforts of the team at Danvic Turf Care who provide the majority of the machinery and manpower to aerate, verti-cut and apply liquid fertilisers, I know we’re in the best position we could hope for.”

A bespoke fertiliser plan uses 90% granular feeds and 10% liquid feeds, with Martyn applying the former with a pedestrian mower supplied by Germinal.

G5 9-7-7:  a slow-release granular fertiliser which boosts growth during the spring and summer.