Posted on Thursday 19 Dec 2019 in News & Latest News
The creation of a bespoke over-seeding mixture has enabled the greenkeeping team at Dunblane New Golf Club to improve the uniformity and aesthetics of the club’s fairways and tees, with a carefully chosen seed formula ensuring new grass growth blends seamlessly with the course’s existing swards.

Established in 1923, the 18-hole, James Braid designed, parkland course at Dunblane New Golf Club offers players stunning views in all directions, with the Campsie Fells to the east, Southern Highlands to the North and West, and Stirling Castle visible to the south.

Instead of working against nature to create a non-native grass sward, course manager, Wes Saunders, and his team work proactively with nature to enhance the course’s existing ecology. On the fairways and tees that means making the most of the existing ryegrass, fescue, bentgrass and poa annua sward, with a bespoke version of Germinal’s A10 tees and divot repair mixture being used to ensure any overseeding or reparative works blend seamlessly with the prevailing sward.

“We’ve used Germinal’s standard A10 mixture successfully for the past five or six years and it has been a relatively good fit with the existing species on our fairways and tees,” Wes explains. “Despite that, I felt we needed to fine-tune the balance of species being introduced either via over-seeding or simple divot repairs to ensure any new growth blended in with the course’s existing aesthetics, colour and texture.” 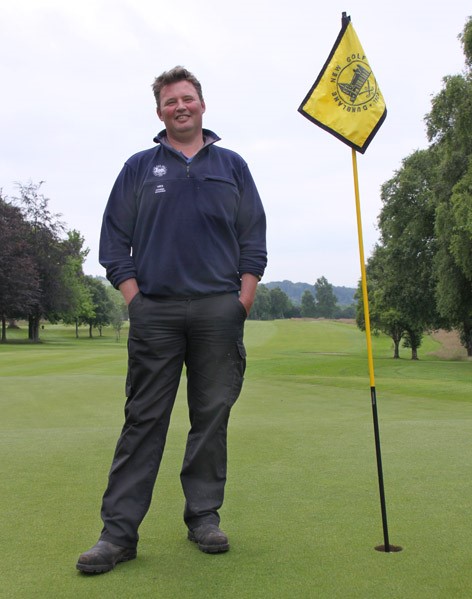 Wes Saunders uses a bespoke version of Germinal’s A10 seed mixture to ensure course repairs and overseeding works blend in with the existing swards at Dunblane New Golf Club.

Working with Alan Thomson, Germinal’s Technical Sales Representative for Scotland and the North of England, Wes decided to drop Tetris – a smooth-stalked meadow grass – from the standard A10 blend, opting instead to increase the proportion of browntop bentgrasses.

“Germinal’s ability to create bespoke, small batch seed mixtures enabled us to tweak our over-seeding mixture so that it is better suited to our needs,” Wes continues. “The under-storey of our fairways is dominated by a combination of fescues and bentgrasses, with ryegrass cultivars adding some much-appreciated wear tolerance, so I wanted to remove the standard mixture’s smooth-stalked meadow grass as it simply doesn’t suit our course.

“Taking Tetris out also gave me some leeway to increase the ratio of bentgrasses in the mixture, with AberRegal and AberRoyal both upped from the standard mix’s 2.5% content to 7.5% each. That gives us a better fighting chance of coping with any future drought conditions, which despite our northerly location, aren’t entirely unheard of, and – thanks to both cultivars’ impressive disease resistance and greenness scores – means our fairways should remain cleaner and more aesthetically pleasing year-round.”

Wes continues to explain how his seed selection strategy differs from others in the region, and that just because some of his near neighbours are following a certain trend, that doesn’t necessarily make it the right strategy for Dunblane New Golf Club.

“There’s been a recent trend in the industry to over-seed with a pure perennial ryegrass mixture, but I prefer to use a wider diversity of species,” he explains. “A pure ryegrass mix won’t blend in on our course due to the difference in colour compared to the established turf, so we’ve decided to follow our own path.” 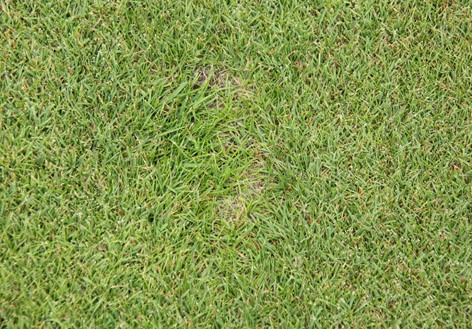 Fresh seed is applied after an application of Primo has been made to slow the existing sward, with a double verti-cut, double mow and solid tine also being used to thin out the existing sward to give new seedlings a head start.

“We reduce our normal cut height from 8mm down to 5mm and slow the growth rate of existing grass plants to reduce competition and let the new seedlings catch up,” Wes continues. “We’re in the process of trialling seeding rates to work out if a 20 g/m2 or 40g/m2 strategy is most effective, with side-by-side comparisons currently showing that the higher seeding rate gives a denser sward initially, but that we subsequently lose a few tillers as time progresses. We’ve got more work to do in terms of analysing strike rates, germination timings and which regime gives the best results in our existing sward, but so far, I’ve been impressed by the overall performance of the Germinal mixture. That’s not to say I won’t be asking Germinal to tweak our mixture again as and when new cultivars become available.”