Posted on Wednesday 4 Sep 2019 in News & Latest News
At Moor Park Golf Club in Rickmansworth, Hertfordshire, the club’s mission is to be recognised as one of the top private members’ establishments in London and the Home counties. For the 23-strong greenkeeping team this means constantly improving the club’s 36-holes and various practice areas.

As well as a long-term project to remodel the courses’ bunkers, Course Manager, Stuart Bertram, and his team have also improved the quality of the fairways on the High and West courses which, without a full irrigation system, can be susceptible to drought damage.

“We’ve introduced a selection of ryegrass cultivars such as Cabrio and Escapade into our predominantly fescue and bentgrass fairways to improve their aesthetics and enhance their year-round playability by producing quick establishing, hard wearing swards,” Stuart explains. “We’ve also split our large greenkeeping squad into two smaller teams so that each of the two 18-hole courses can be managed independently. It’s a more efficient way of supervising workloads and lets us manage the courses to the high standards expected by our members.”

Stuart and his teams have also been busy creating a bespoke short game area which adds an extra dimension to the Moor Park golf experience: covering a total of 3,000m2 and designed by James Edwards, this area comprises two greens (a 1,000m2 horseshoe shaped chipping green and a 300m2 putting green) and numerous tee pods, each of which presents a slightly different challenge – from lob and bunker shots to long and short chip shots. 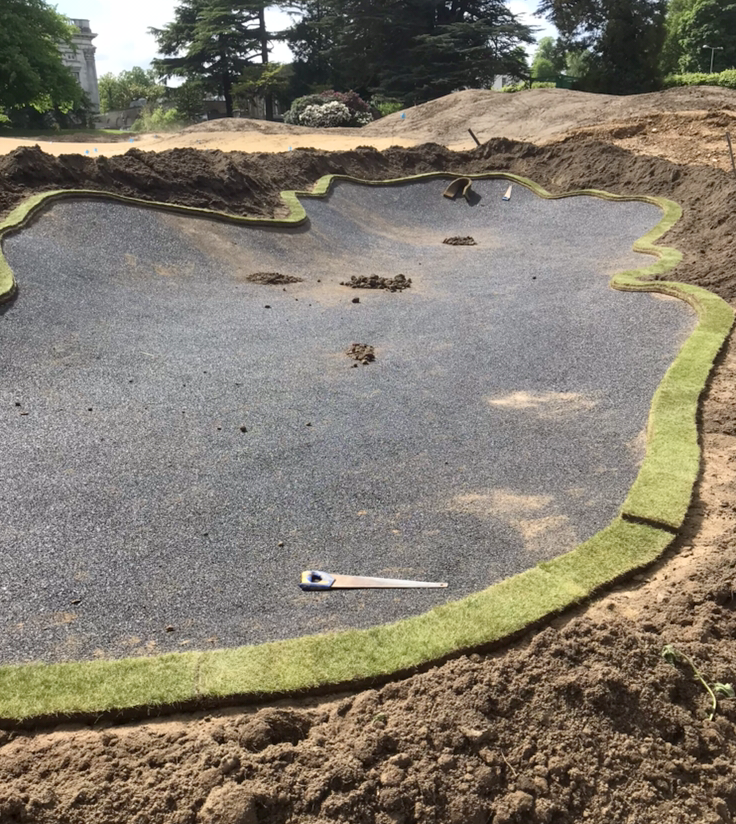 Construction of the James Edwards designed chipping and putting facility began in May 2018.

“The new facility replaces a very basic chipping green which offered comparatively little shot variation,” Stuart describes. “It’s a significant investment by the club and one which perfectly demonstrates our commitment to improve our offering to members by creating a first-class facility for members to practice their short game.”

Six weeks after seeding, the greens mixture had put roots down to an impressive depth.

Construction of the new greens, tees and bunkers started in May 2018: the site was reprofiled by Profusion before being hydroseeded by Oliver Brown Ltd.

“In addition to the architect and landscapers I also worked closely with Sandy Pentecost at Germinal who helped to choose the appropriate seed mixtures for each of the facility’s different zones,” Stuart explains. “We selected Germinal’s A11 Golf Greens mix (40% chewings fescue, 40% slender creeping fescue and 20% browntop bent) to create a dense and disease resistant putting surface and used a bespoke version of Germinal’s A5 Cricket Tennis and Tees mixture for the tee pods and greens surrounds.

Despite being sown in drought conditions, by mid-July 2018 the Germinal grass swards were well established.

“The standard A5 mix contains an equal split of Escapade (perennial ryegrass) and Cabrio (ultra fine perennial ryegrass), but that would have created a sward which would have been noticeably thicker than that out on our main courses,” Stuart continues. “Instead we adjusted the ratio to give a 60:40 split in favour of Escapade to produce a slightly lighter sward which more accurately replicates our on-course conditions.”

The short game facility’s raised roughs were seeded with Germinal’s A13 Golf Roughs and Habitat Areas mixture which comprises 62.5% strong creeping red fescue, 10% sheeps fescue, 25% chewings fescue and 2.5% browntop bent. “We’ve allowed the grasses on the roughs to mature so that they add an extra bit of height to provide additional privacy from one part of the green to the next,” Stuart adds. “The whole facility was designed so that two people can be using the facility at the same time without interfering with each other’s shots, and the added height the grasses provides exaggerates this effect” Stuart adds. 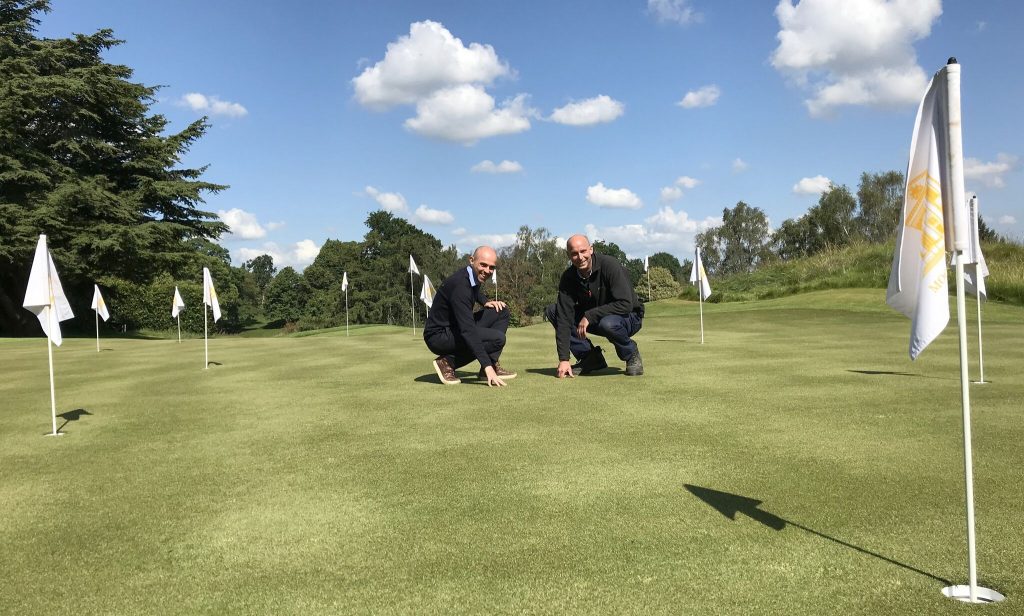 Despite being seeded in drought conditions, all the swards established quickly and vigorously with the chipping facility being officially opened by European Tour professional, Callum Shinkman, a little under 12 months after construction started.

“The feedback from members has been fantastic,” Stuart describes “That’s partly because of specific design elements such as the ability to see where each shot has landed from the raised tee pods which put the greens at the player’s eye level, and partly because we’ve used good quality cultivars which look terrific and replicate conditions out on course. It’s a classic example of the type of work we’re doing to enhance the golfing experience for our members.” 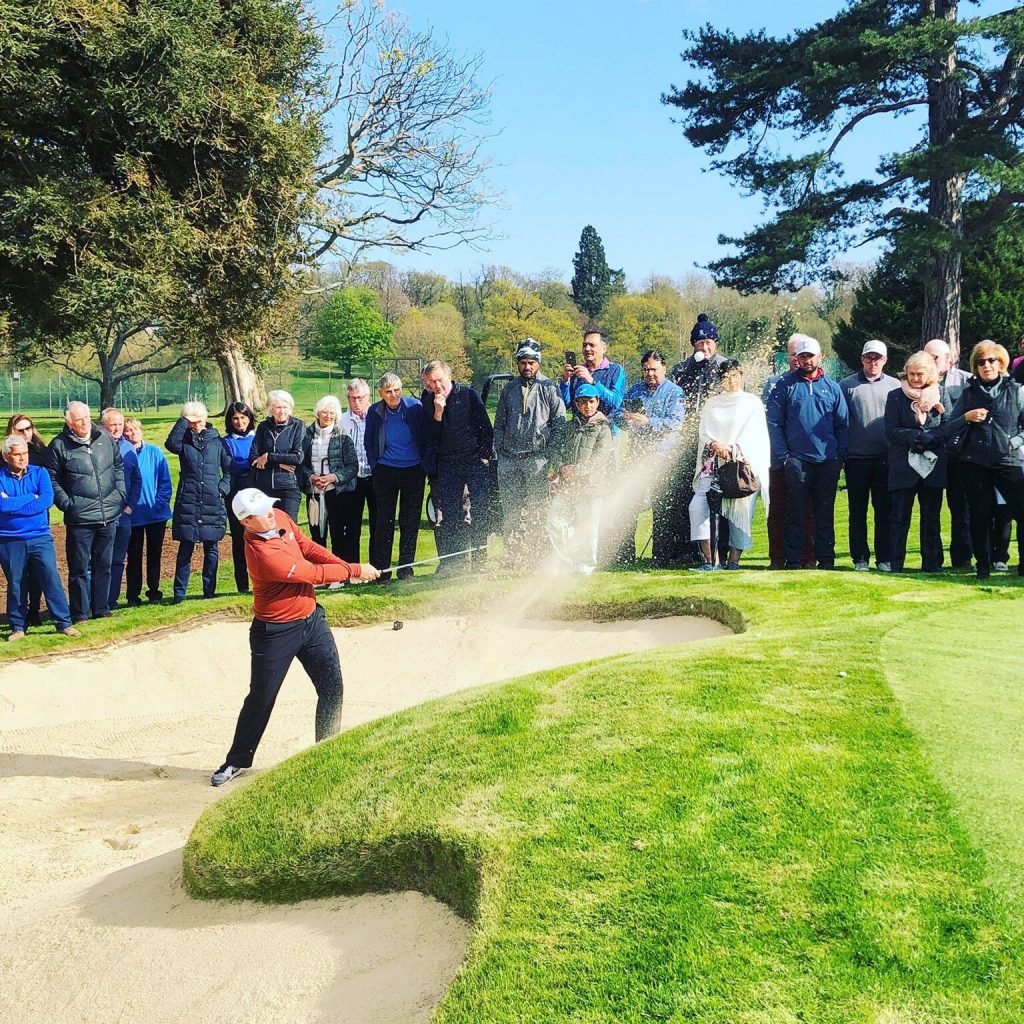