Posted on Thursday 19 Dec 2019 in News & Latest News
Scott Davidson, head greenkeeper at Cathcart Castle Golf Club to the south of Glasgow, has reinstated a redundant green on his club’s course, with the renovated space acting as a trial site for the latest generation of creeping bentgrasses. By growing a small selection of cultivars under real world conditions, he hopes to determine whether or not creeping bents are a viable option for greenkeepers in the west of Scotland and, if so, whether these species can be managed with a reduced reliance on fungicides.

Since Scott joined Cathcart Castle Golf Club nearly four years ago, he and his team have been working hard to reduce the organic content of the greens on the club’s James Braid designed 18-hole parkland course. “We’ve successfully reduced the organic content of our greens from 11-12% to less than 6% by introducing a regime of hollow and micro-coring, scarifying and verti-cutting to reduce excessive thatch,” Scott explains.

“We’ve also overseeded with a 50:50 blend of AberRegal and AberRoyal browntop bentgrasses to introduce two UK-bred, native species which are able to cope with the challenging conditions associated with our northerly location.

“Both species have performed well for us and have proven more than capable of germinating quickly, even when the cold easterly winds which can sometimes dominate our overseeding window bring about unexpected frosts which would hamper a lot of other grass species.

“But, as happy as I am with the performance of the Aber varieties, I’m always interested in how the next generation of cultivars will perform. I’ve therefore worked with Alan Thomson of Germinal to set up a small-scale trial to see how 007 DSB and 777 DSB can cope with the Scottish climate.”

The small-scale trial is being held on a redundant green which was retired following a course re-design 10 years ago. “It had become a dumping ground for old cores,” Scott continues, “so before the trial could commence, we had to strip the green right back and construct a new root zone and sand drains. We then divided the green into three, seeding each plot with 007 DSB, 777 DSB and our current browntop mixture.” 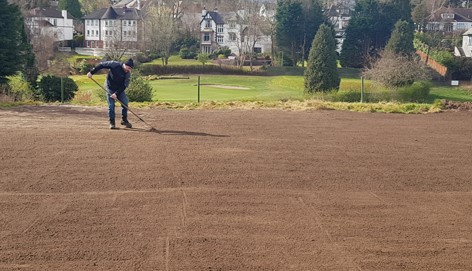 After the trial green was reconstructed it was divided into three zones and seeded on 2nd April with 007 BSD, 777 DSB and Germinal’s AberMajesty blend of browntop bents.

The aims of the trial are three-fold: to prove whether or not creeping bents are a viable option for Scottish courses, to find out if creeping bents can be managed with fewer fungicides, and to assess nutrient requirements to determine if they are a financially viable option.

“We’re hoping the trial will provide some beneficial findings for our own purposes, whilst also giving other Scottish greenkeepers the opportunity to see for themselves how creeping bents perform in our colder climate,” Scott adds. “And because we haven’t currently got our own turf nursery, we’ve earmarked the trial green for this purpose once the trial has finished. In the meantime, we’ve already seen some interesting results, with the two creeping bent plots establishing and growing away significantly more quickly than the bentgrass blend.”

The trial was sown on 2nd April, with the first seedlings emerging 20 days later. “About a week after seeding we had four days of heavy frosts with temperatures falling several degrees below freezing,” Scott describes. “This was followed by three weeks without any rainfall and a subsequent period of hot weather when temperatures reached 22 degrees. Despite these testing conditions, both of the creeping bents established well and have conditioned to thrive.

“We’ve purposely avoided giving the trial swards any special attention beyond our normal greenkeeping practices on the rest of the course. Instead, we’ve focused on running the trial under natural conditions, allowing Mother Nature to dictate events.”

“Despite the testing early season conditions, all three plots established and grew away well,” adds Alan Thomson, technical sales representative for Germinal. “The bentgrass plot has performed well, but by comparison the two creeping varieties have produced a noticeably denser sward. 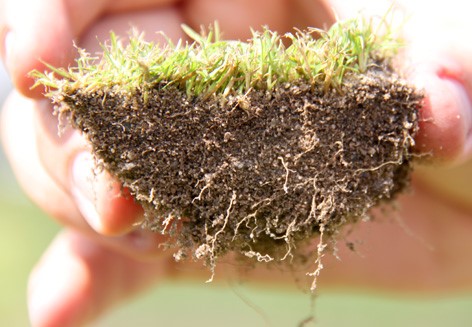 After the trial green was reconstructed it was divided into three zones and seeded on 2nd April with 007 BSD, 777 DSB and Germinal’s AberMajesty blend of browntop bents.

“It’s no surprise that the creeping bents have performed so impressively; after all they are commonplace in parts of the US where temperatures regularly fall to -20o C in the winter, so there’s no reason why they won’t perform in the Scottish climate.

“Theoretically, creeping bents are also more resistant to key diseases such as fusarium, so it’ll be interesting to see how the trial plots fare later in the year and whether Scott can maintain them without the need for a full fungicide programme.”

With phase one of the trial – establishment of the plots – well underway, Scott is starting to plan phase two: testing a range of fungicide, fertiliser and turf conditioner protocols to assess their impact on the performance of the creeping bents. “I’d really like to find a viable way for us to improve disease control through improved greenkeeping practices rather than having to rely on chemicals,” Scott adds. “That’s a challenge the whole industry needs to meet and I’m hopeful our ongoing trial work will, in some small way, enable us to unlock a few answers which we’ll share with the wider industry in due course so that other greenkeepers can benefit from our findings.” 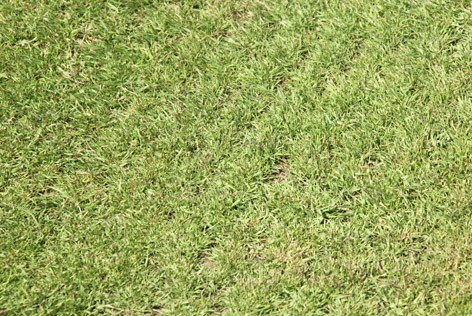 Early indications suggest that the 777 DSB germinated more quickly than its predecessor, 007 DSB, but that both varieties have knitted in well to give excellent ground coverage.