Fineness of leaf is the overseeding focus in Kent

Posted on Wednesday 4 Sep 2019 in News & Latest News
For the Wildernesse Club near Sevenoaks in Kent, two key competitions in June – the Club Captain’s Prize and a regional qualifying tournament for The Open – provide the focus for greenkeeping efforts each year.

With two main renovation windows (a four day block in February and an additional three days in late July when the majority of overseeding work is carried out) key to ensuring the course is in prime condition not just for those events, but for the entire year.

“Wildernesse is consistently rated as one of the best in Kent, a reputation that myself and my team of greenkeepers are rightly proud of,” explains course manager, Mark Todd. “The heavily tree-lined course harks back to when the Club was founded in 1890 although parts of it have changed considerably over the years.

“The majority of it is based on a sandy loam soil although we do have some areas of quite heavy clay. We don’t use tee mats or temporary greens during the winter which means we work hard to keep on top of our preventative maintenance schedule to keep the course in good condition 365 days a year.” 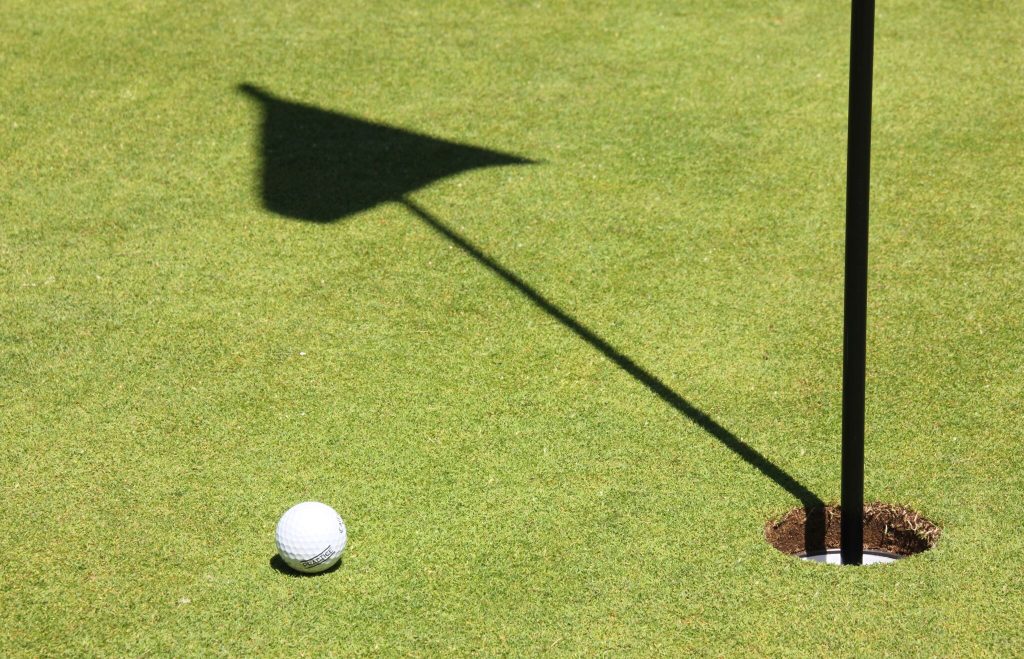 Greens are overseeded with a blend of browntop bentgrasses to give a fine-leaved, disease resistant sward.

The club has invested heavily over the last 10-15 years in a number of course improvement projects including a partial bunker refurbishment programme, a new fleet of groundcare kit, extra staff and a new irrigation system for tees, greens and approaches plus hydrant points for fairway watering.

“The money that’s been spent has made a noticeable difference to our ability to keep the course in tip-top condition, but we’re still very much at mother nature’s mercy,” Mark continues. “Alongside the loss of so many fungicides and pesticides in recent years, weather extremes are our biggest headache, so we’ve worked hard to improve drainage around the course, with gravel banding drains and drill and fill aeration helping the wetter areas to cope with the worst weather.”

The Cabrio content of Germinal’s A28 mixture gives a recent tee divot repair an exceptional fineness of leaf.

An irrigation system was installed eleven years ago but doesn’t include full fairway watering. “We make the most of two travelling irrigators but in really dry years it’s difficult to find the balance between the requirement to irrigate and the need to keep out of players’ way,” Mark describes. 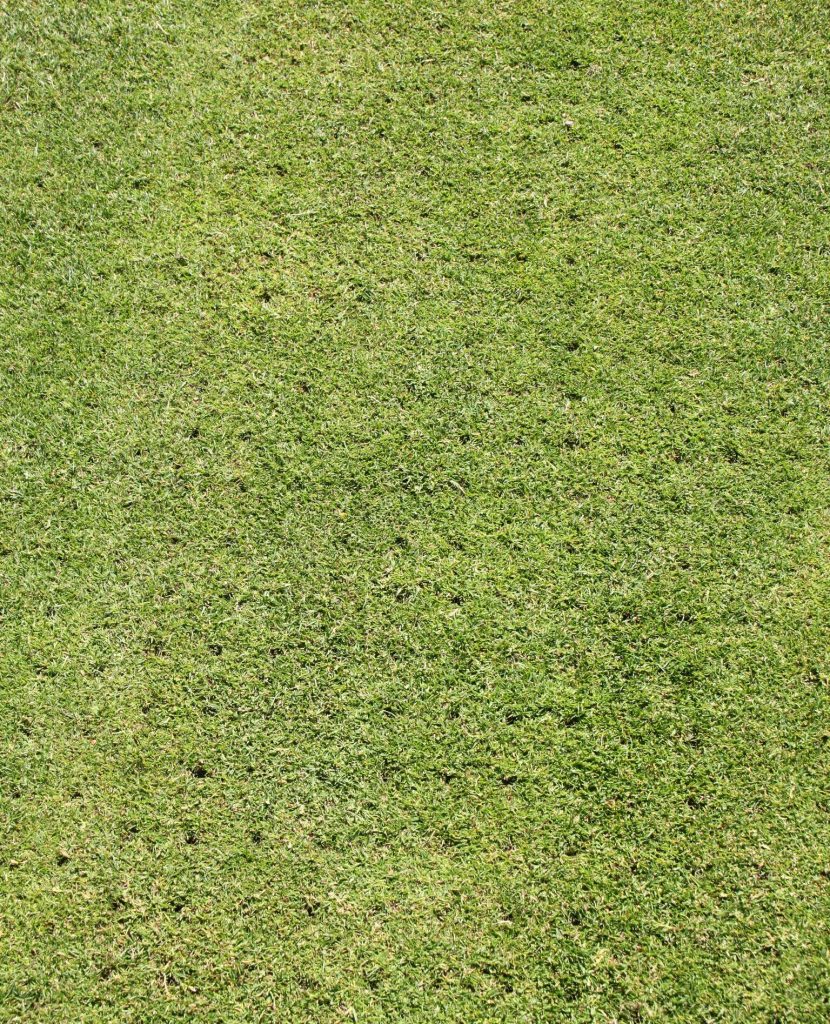 Sign of the tines: a recently tined tee prior to being top dressed

“During last summer’s drought we were watering the course throughout the day, which wasn’t the most efficient way of operating, but it got us through the drought period relatively comfortably and with only few areas really suffering from the lack of rainfall. I was concerned we were going to have to do some fairly extensive overseeding work to alleviate the damage caused by the dry weather, but in the end the team’s hard work paid off and, in addition to our routine overseeding programme for our greens and tees, only had to overseed three fairways.” 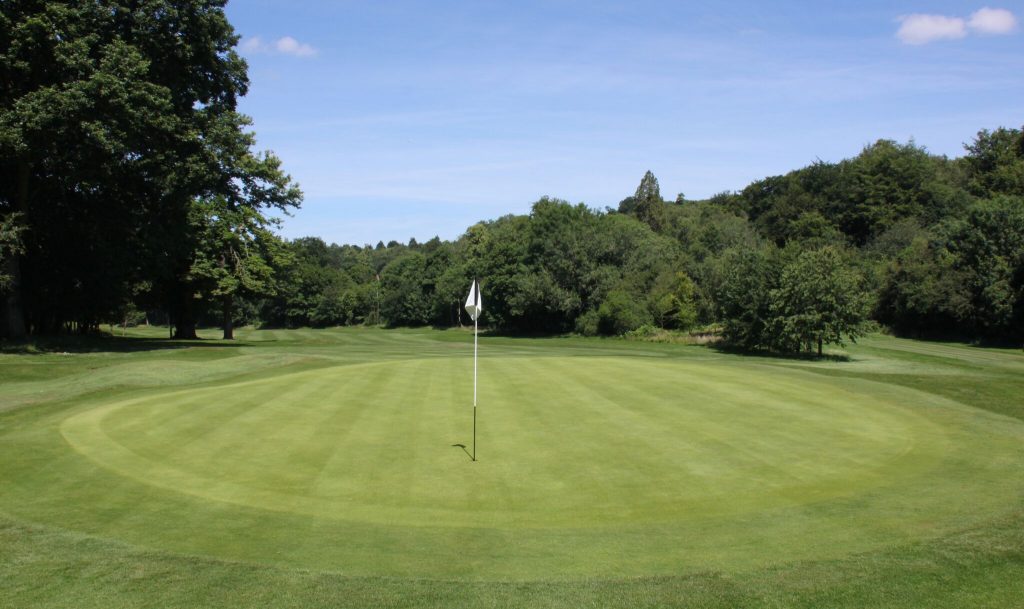 The push-up greens are overseeded every summer, with secondary renovations carried out in February if required.

“We use the same mixture on our tees and have found it produces a fast-germinating, fine-leaved surface which is hard-wearing enough to be used all year round,” Mark adds. “It produced new growth within a few weeks of being sown on the fairways and has subsequently given good coverage, even in places where there’s relatively little soil to retain moisture.”

The Wildernesse fairways are also verti-drained to a depth of 14 inches once a year and mown to a height of 13mm. Tees and approaches are aerated with a 13mm solid core tine and receive monthly top dressings, while the greens are hollow cored with 13mm tines, solid cored with 6-8mm tines and overseeded with Germinal’s AberMajesty mixture – a 50:50 blend of AberRoyal and AberRegal browntop bentgrasses. The greens are also injected with compressed air twice a year to relieve soil compaction and aid drainage.

“We use bentgrasses religiously when overseeding the greens in the summer, and also as part of our February renovations if needed,” Mark explains. “We drop-spread and brush in half of the seed, with the remaining 50% applied in a sand carrier when we’re coring the greens. It’s a cost-effective way of overseeding our push-up greens as the AberMajesty helps to keep our greens largely disease-free and works well to outcompete poa annua. And because the seed germinates quickly, we’re able to get the greens back to their best in as short a time as possible which is exactly what our members want and expect.” 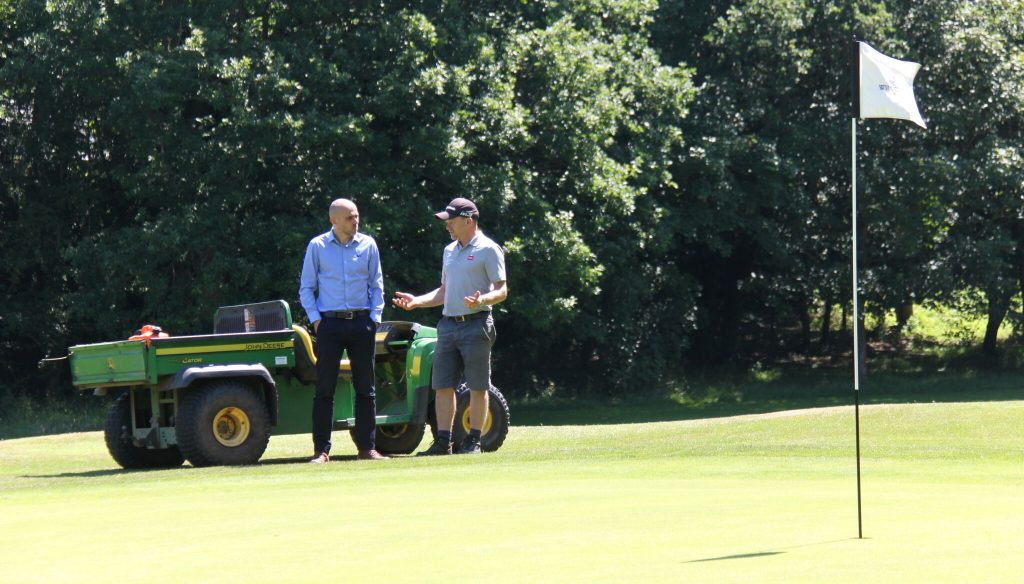