Posted on Tuesday 16 Feb 2021 in News & Latest News
With a team of just three greenkeeping staff, Barry McCulloch has instigated a series of cultural changes to the way the course at Caldwell Golf Club in East Renfrewshire is managed, with a focus on regular aeration to improve drainage as well as over-seeding with quality cultivars transforming the playing characteristics of the almost 120-year-old course.

Barry McCulloch joined Caldwell Golf Club in 2018 with a specific remit to improve the quality of the course’s surfaces.

The original parkland course at Caldwell was laid out by former Open Champion Willie Fernie in 1903 and subsequently improved in the 1920s by five times Open winner James Braid. Today the course is overseen by a team of four: course manager Barry McCulloch, his deputy Stewart McMillian, greenkeeper Frank Burns and trainee greenkeeper Declan Kee.

Barry joined Caldwell in January 2018, having spent the previous 13 years at Whitecraigs Golf Club in East Renfrewshire, with a specific remit of improving the course’s overall condition and returning it to the standard expected by the club’s members.

“By bringing a new set of eyes to the problems the course was facing I’ve been able to introduce a series of cultural practices which have improved the course’s playability and in turn has helped to pull in new members,” Barry explains.

“Our primary focus has been to reduce the organic matter of the greens, tees and fairways and to improve drainage across all 18 holes. With the backing of the Board, we’ve replaced 80% of the club’s machinery so that we are able to improve the playing surfaces and reduce any excessive build-up of organic matter whilst presenting a more aesthetically pleasing course.”

Prior to the changes put forward by Barry, the club was using machinery which he felt was too heavy for the course’s parkland composition. “I wasn’t happy using our tractor and deep aerator on the greens for coring as I believed it was far too heavy a piece of kit for that type of work,” Barry describes. “We’ve therefore invested in a smaller and lighter Toro ProCore machine which has made the process quicker and, because the new machine is more compact, I can cover more area on the greens.

“We’ve also changed the grade and quality of sand we’re using to top-dress the greens, aprons and tees,” Barry continues. “Instead of using washed dune sand we’ve switched to a coarser grade which makes drainage after heavy rainfall events that bit quicker. Something as simple as that has made a noticeable impact, with members regularly commenting how surprised they are that the course has dried out quickly even after long periods of very wet weather.” 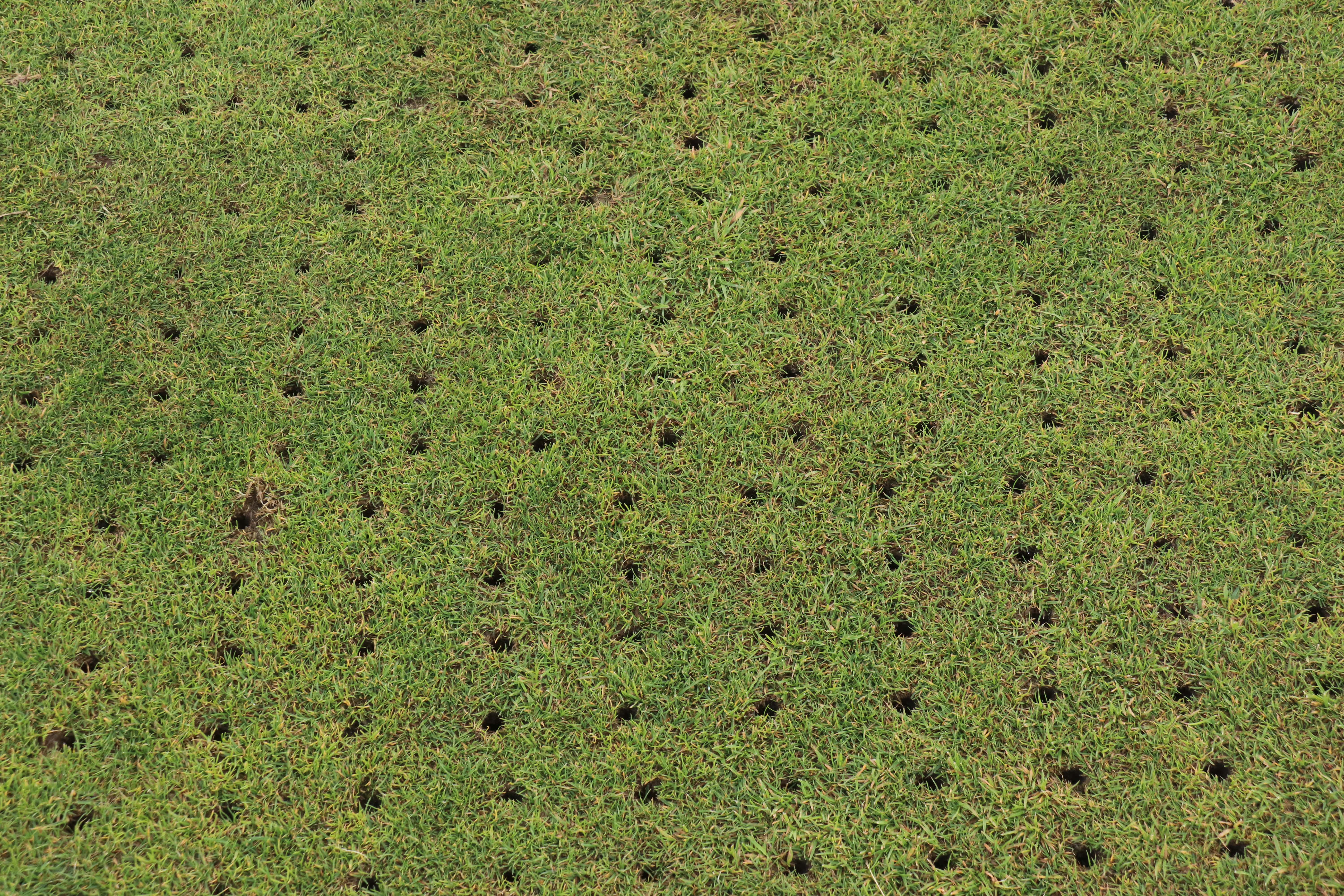 Regular aeration, coring and scarifying and over-seeding have been key to improving the playing surfaces on Caldwell’s parkland course.

Barry has also established an extensive fairway aeration programme with an outside contractor being used for the first time in autumn 2020 to shockwave the course to a depth of 250mm to remediate some of the soil compaction on the fairways. “We’ll also continue to verti-drain and slit-tine the fairways at least once a year and will be coring and scarifying as often as possible to keep on top of organic matter,” Barry adds.

A formal maintenance week has also been incorporated into the Club’s official calendar. “The board has been 100% supportive of my vision and has agreed to block off the last week of June so that we can renovate the greens,” Barry explains. “The wider membership has also been very understanding as they recognise that giving a distinct window during which we can scarify, verti-drain, tine and top-dress greens, tees and aprons means they’ll be able to enjoy better playing conditions for the rest of the year.”

To compliment these cultural changes, Barry has also introduced new grass cultivars to the Caldwell course: “Having successfully used Germinal’s AberMajesty mixture (a combination of three browntop bent cultivars: 45% AberRoyal, 45% AberRegal and 10% Musket) during my last two years at Whitecraigs it was a no brainer for me to introduce the same blend to the greens at Caldwell,” Barry exclaims. “It’s quick to germinate, gives great natural colour and provides excellent sward density and resistance to anthracnose and fusarium.

“We’re using AberMajesty at 6g/m2 to overseed the greens in the spring and again in the autumn. We have switched from using a drop seeder behind the corer to dropping fresh seed into the dimples left behind by a sarel roller which we run in three directions. I’d like to take things a step further by hiring-in a dedicated over-seeder so that we can apply seed even more accurately. However, from a purely aesthetic perspective, I’m not keen on seeing the straight lines of new seedlings that a disc seeder produces. Those lines of new growth might be easy to spot but in my opinion a dimple seeder will give us better overall coverage.” 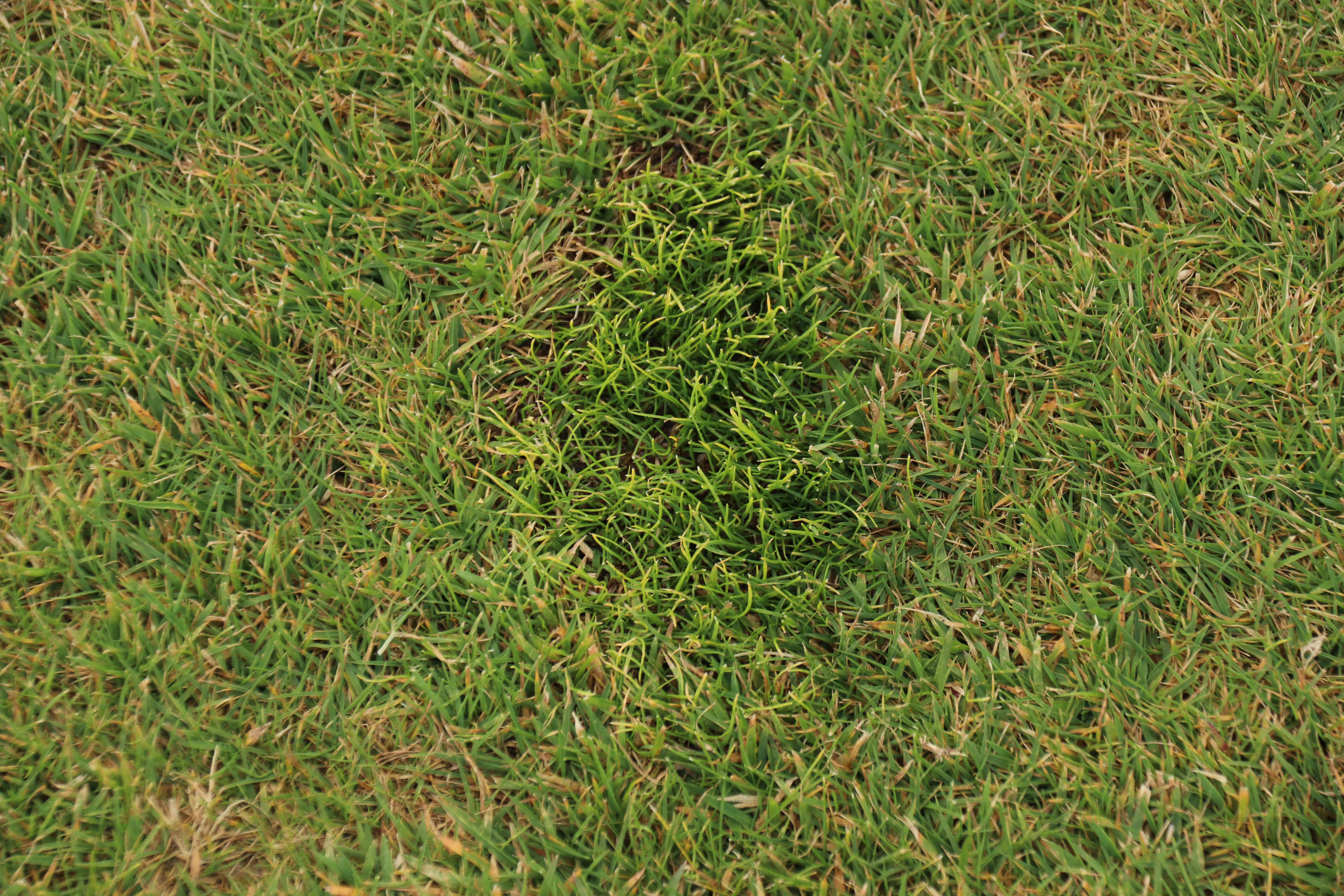 The Germinal fairway seed is fast to establish and quickly repairs scars and divots.

The fairways at Caldwell are overseeded using a basic blend of three ryegrasses – also supplied by Germinal. “We use 240kg of seed each year on the fairways so I had to find a budget-friendly mixture which would still give good germination rates and produce a fast-establishing sward. The Germinal mixture easily accomplishes that to the point we’re regularly receiving positive feedback from members who have noticed the difference. Having introduced divot mix bags which members are encouraged to take with them so that they can overseed any damage they might make has given them a vested interest in the quality of the fairways. The really rewarding thing for them is seeing new growth appearing in the divots they have repaired and knowing they are making a worthwhile contribution to improvements on the course.”

A new seed mixture – Germinal’s A5 Ultrafine Cricket, Tennis and Tees, a 50:50 blend of Escapade perennial ryegrass and Cabrio ultrafine perennial ryegrass – has also been introduced to the course’s tees. Barry explains: “We first used A5 on a trial basis to understand how it would blend into the existing sward but from what we’ve seen in terms of colour, sward density, fineness of leaf and rapid repair capability we’ll be rolling A5 out across all of our tees going forward. We will be using it at an overseeding rate of 8-10g/m2. It’s ability to produce strong seedlings within as little as 7-10 days is especially useful for bringing heavily damaged par 3 and par 4 tees back into play quickly.”

The culmination of these changes is that the course is now in much better condition compared to a few years ago,with membership numbers steadily rising and Barry’s team frequently being complimented on how the course is playing better than it has in years. “We appreciate that kind of feedback, especially as our small team works really hard all year round to make a difference,” Barry adds. “We’ve still got our work cut out – especially in terms of ensuring the course can cope with increasingly frequent and increasingly intense rainfall – but we’re well on our way to ensuring the entire course can remain open and ‘on-greens’ throughout the whole year.”

In addition to the day-to-day course improvements, Barry McCulloch and his team are also working with Germinal’s Alan Thomson to trial a pure creeping bent sward for greens and a pure ryegrass sward for collars and tees. “We’re lucky to have a 19th green on the course,” Barry explains. “It was originally the course’s 15th hole which we’ve seeded with pure 007 DSB to see if it’s possible to reseed a green with pure creeping bent in September and have it established and ready for play in time for the first medal competition of the year in early April.

“We’ve also overseeded an adjoining area with pure A5 to see how quickly we can establish an all-new tee and collar sward. At the time of writing, it’s still early days, but after just a few weeks including five days of frost and 70mm of rainfall, both swards seem to have established well and it’ll be interesting to see how things develop over the winter.”

“Re-establishing greens and tees in this way is popular in Scandinavia,” Alan Thomson explains, “so there’s no reason why it shouldn’t work in our Scottish climate. In theory, as long as the winter doesn’t treat the trial plot too unkindly the new swards should be ready in time for the start of next year’s busy fixture list and this will give Barry the option of making further improvements and efficiency savings to the way the course is managed.”