Posted on Monday 15 Feb 2021 in News & Latest News
With a playing season that lasts from mid-April to late September – and on occasion into mid-October – ensuring there’s always a fresh wicket available for East Moseley Cricket Club’s first team is a real challenge, but one that the team at Greenside Up Grass tackles with relish. 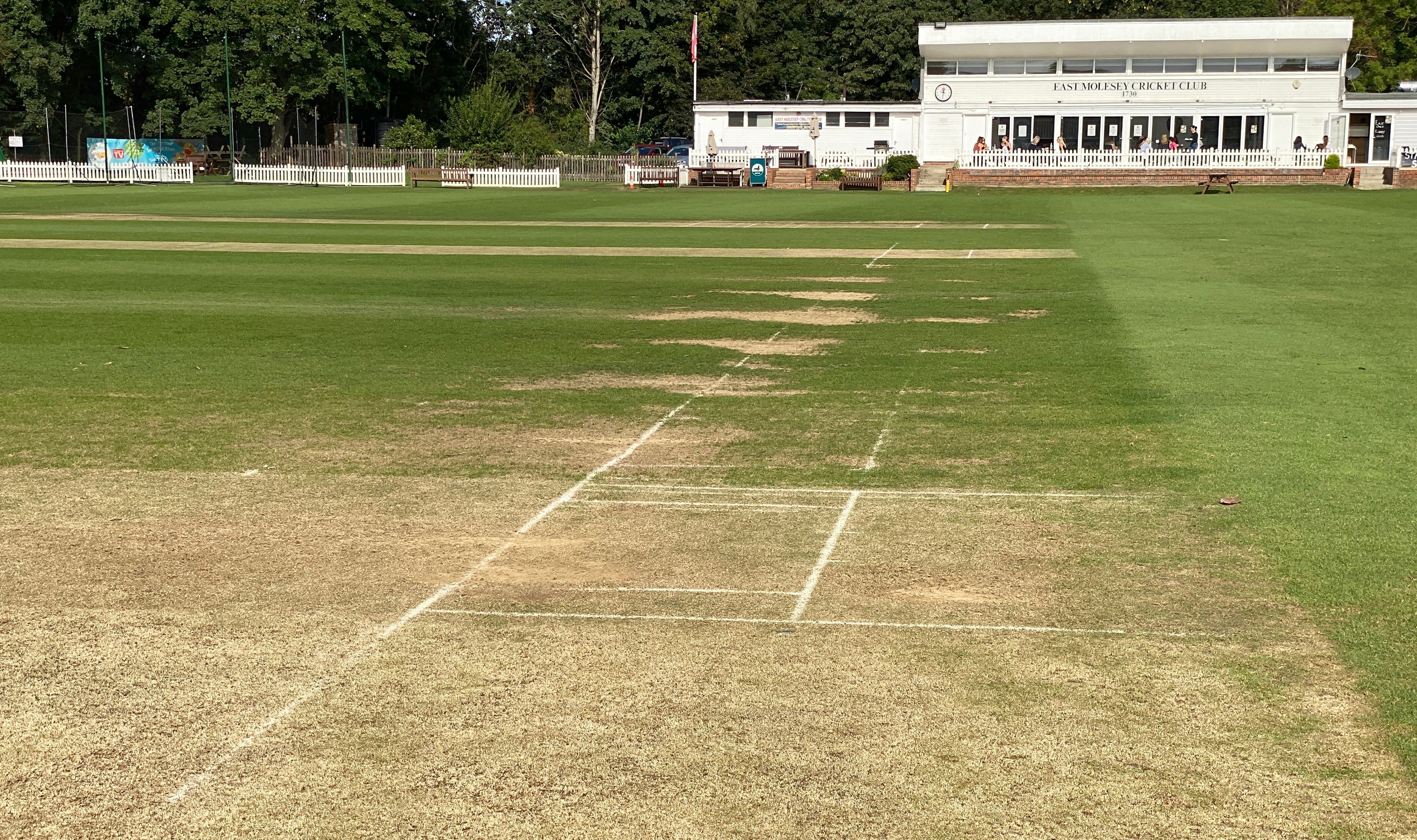 The East Molesey 1st XI likes to play on a new wicket every week which, while adding to the pitch maintenance workload, means there’s less damage to repair each time a used wicket is taken out of rotation.

Greenside Up Grass is a family-run business owned by Nick and Portia Marsh. The company specialises in landscaping and lawn maintenance as well as sports pitch construction, renovation and maintenance for a number of football, rugby and cricket clubs throughout Surrey, Sussex, Middlesex and South West London.

One of these clubs, East Molesey Cricket Club, has employed Greenside Up Grass for the past six years to maintain its Memorial Cricket Ground at Mousley Hurst where cricket has been played since it hosted its first match between a Surrey XI (selected by The Prince of Wales) and a London XI on 7th June 1735. The pitch was also host to the first cricket match to enforce the modern LBW ruling.

As a prominent team in the Surrey Championship Premier Division, East Molesey’s season starts as early as mid-April, when pre-season friendlies are held ahead of the main season kicking off in the first weekend of May. With matches held nearly every night of the week and regular back-to-back matches at weekends, keeping the square in prime condition takes a lot of hard work and dedication.

“We’ve got staff on site at the Memorial Ground seven days a week,” Nick Marsh explains. “During the peak playing season we’re mowing the outfield and square at least three times a week, with wickets and creases cut, marked and rolled on a daily basis. We’re also kept busy during the off season, with autumn renovations, winter maintenance and pre-season preparations ensuring there’s always plenty for us to do.” 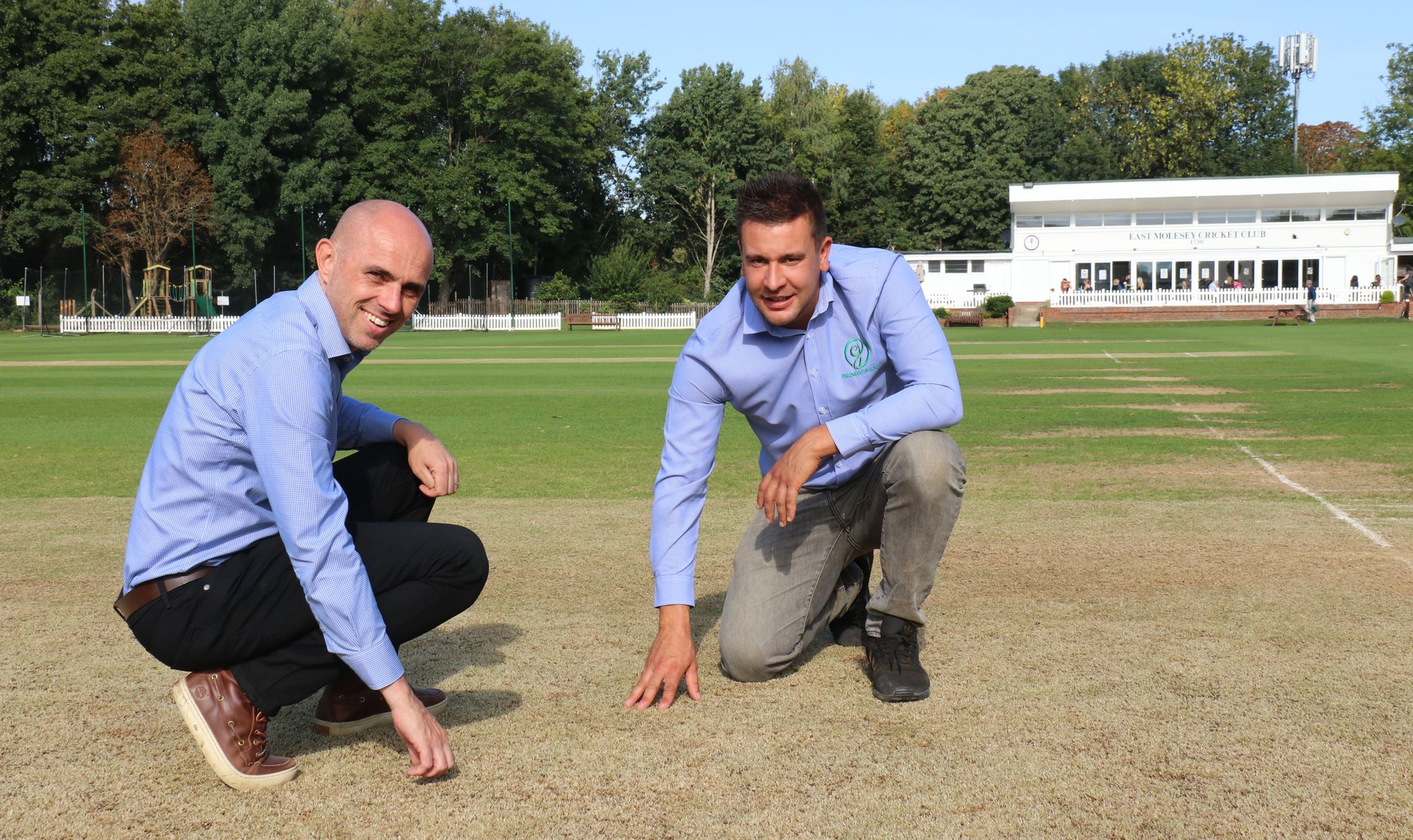 Sandy Pentecost (left) of Germinal works with Nick Marsh to ensure the East Molesey pitch receives the relevant balance of nutrients throughout the year.

During the quieter off-season Nick and his team maintain a strict regime of leaf removal, aeration, cutting and fertiliser and iron applications, but it’s the autumn renovation window which is where the pitch maintenance team really earn their keep.

“The club traditionally likes to extend its season as far into the autumn as possible,” Nick explains, “which makes our annual renovation programme that little bit trickier as we have to contend with colder soil temperatures and heavy morning dews by the time the season finally draws to a close.”

As soon as the season ends, the entire square is cut to a height of 5mm before being graded in two directions to a depth of half an inch. The resulting debris is then cleared with a ride-on brush before the wickets receive an additional cut. Each wicket end is then repaired by hand before the entire square is over-seeded with Germinal’s A5 Ultrafine Cricket, Tennis and Tees mixture (50% Escapade perennial ryegrass and 50% Cabrio ultrafine perennial ryegrass).

“We apply seed in two directions at 35g/m2 using a rotary spreader which places the new seed into the grooves made by the grader,” Nick describes. “The square is then dressed with seven tonnes of Surrey loam with the ends being dressed by hand.”

The outfield is also renovated each year, with a disc seeder used to apply Germinal’s A28 seed mixture (a three-way blend of an ultrafine perennial ryegrass, a chewings fescue and a slender creeping red fescue) in two directions after scarifying in two directions.

“In all it takes us about three days to over-seed the square and outfield, but if the square is particularly dewy in the mornings that timeframe will be extended as we can’t use the grader when the surface is overly wet.

“We use A5 on the wickets because it’s the best rated cricket mixture according to the STRI’s data,” Nick continues, “and because it produces the desired effect: fast and reliable germination (even when sown late in the season), an aesthetically pleasing sward which recovers well, and a playing surface which is fine but robust enough to ensure I can produce enough wickets to keep all the club’s teams happy throughout the entire season.” 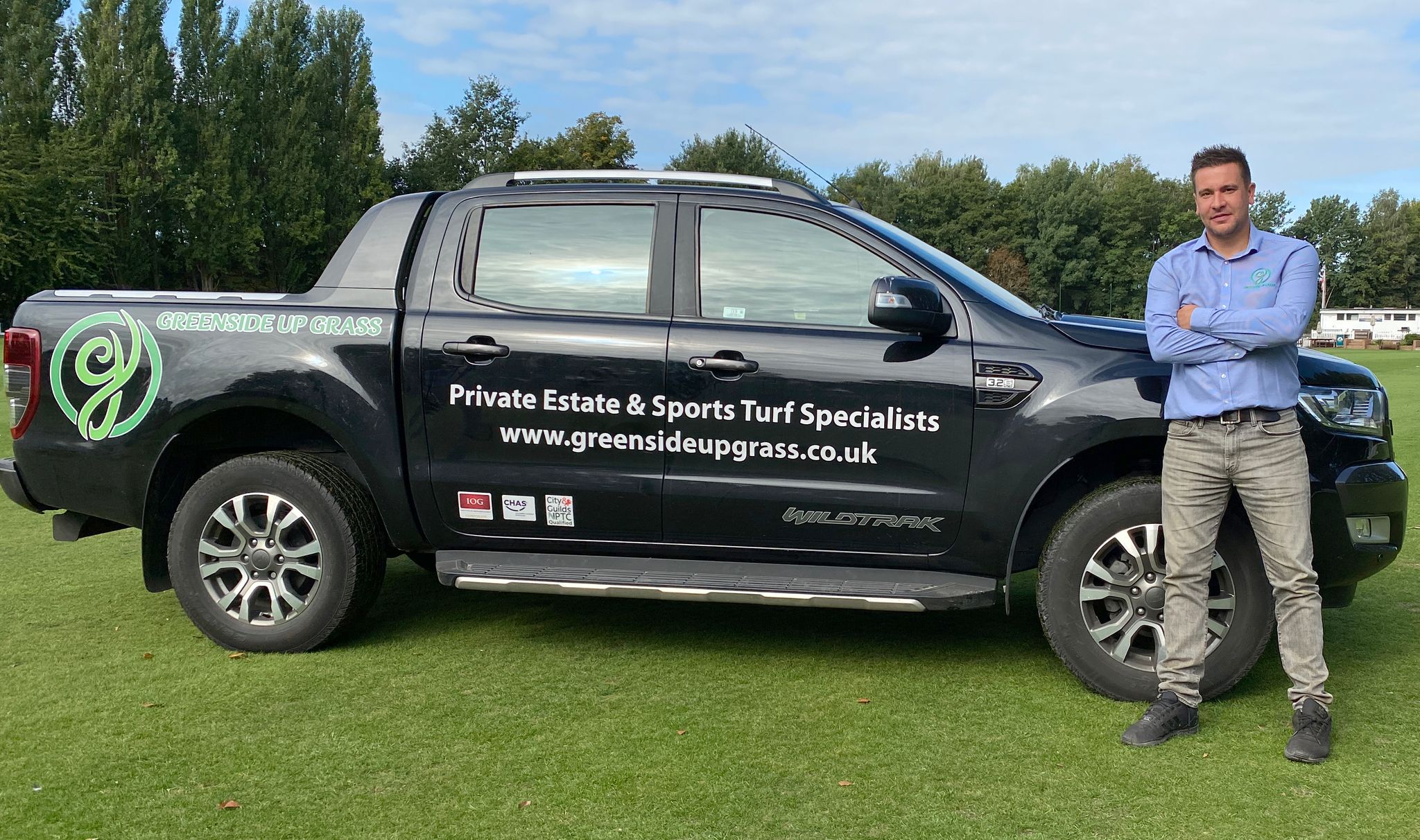 Nick Marsh started his career as a groundsman at a top independent school in Surrey before establishing Greenside Up Grass in 2012.

In addition to being used for annual renovations, A5 was also used when the square was stripped and resurfaced two years ago. According to the club’s chairman, that produced “the best wicket the ground has ever had”. And despite an exceedingly heavy fixture list since the first Covid-19 lockdown was eased, the square continued to produce some very good wickets right up until the end of the season.

“As soon as fresh seeds have reached stage two or three germination a Novatec Premium (15-3-20 +2% MgO +TE) feed is applied to give the new plants a kick and to help the entire sward thicken up into a denser covering,” Sandy Pentecost of Germinal interjects. “The new sward is then cut regularly during the winter with a rotary mower, which as well as removing any excessive growth also keeps grass blades standing upright and vacuums any fallen leaves.”

The square is also aerated a few times during the off season, and as spring approaches and pre-season rolling commences, the rotary mower is substituted for a cylinder machine and more nitrogen is applied. “Last year we didn’t overseed until November, but we still saw excellent rates of germination,” Nick reports. “That’s testament to the virility of the seedstock we get from Germinal, and to the quality of the Novatec fertilisers which provide a steady supply of nutrients for as long as 8 to 10 weeks.

“We use slow-release fertilisers because they give a more consistent, less erratic pattern of growth. We also apply an iron-based feed in the spring to keep moss out of the sward and we’ll apply a selective weed killer if its needed, but on the whole the square remains relatively clean throughout the year.”