Posted on Tuesday 13 Aug 2019 in News & Latest News
Following complaints from residents on a new housing development in Basingstoke about the poor appearance of a strip of land separating their homes from a public open space, landscaping and specialist grounds maintenance contractor, The Grounds Care Group, has recently been appointed to remediate the offending area by establishing a colourful strip of wildflowers.

As well as enhancing the overall aesthetics of the housing development, the wildflowers also provide the added benefit of creating an ideal environment for bees and other pollinating insects.

Initial attempts to create a sustainable wildflower meadow on the 6-metre strip of land had failed because the man-made soil profile was thin and poorly constructed and therefore unable to support a viable sward of vegetation. 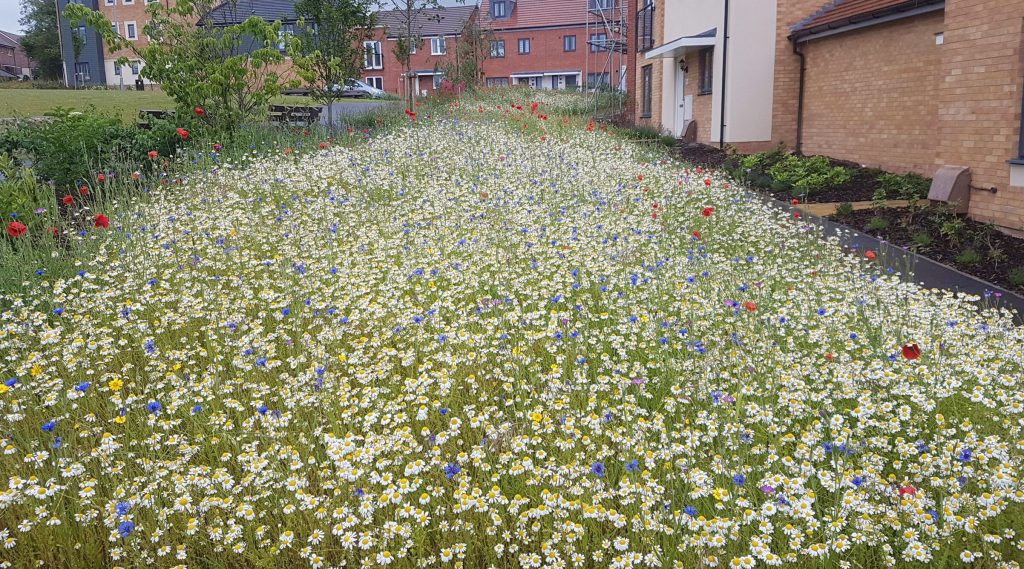 The strip of wildflowers improves the housing development’s aesthetic appeal and attracts bees and other pollinating insects.

The Grounds Care Group was contacted by the housing developer to offer its advice on how to remediate the offending area. The site was subsequently surveyed, and it was recommended that the entire strip should be re-profiled with a properly constructed layer of quality topsoil which would be able to sustain a variety of grasses and wildflowers.

The Grounds Care Group had worked with Germinal’s technical sales representative, Sandy Pentecost, on a number of previous projects and asked him to recommend a seed mixture which would create a hit of colour as quickly as possible.  He specified Germinal’s WF10 Cornfield Annuals, which contains a mixture of traditional, native wildflowers including Corn Chamomile, Corn Marigold, Corn Poppy, Corncockle and Cornflower. 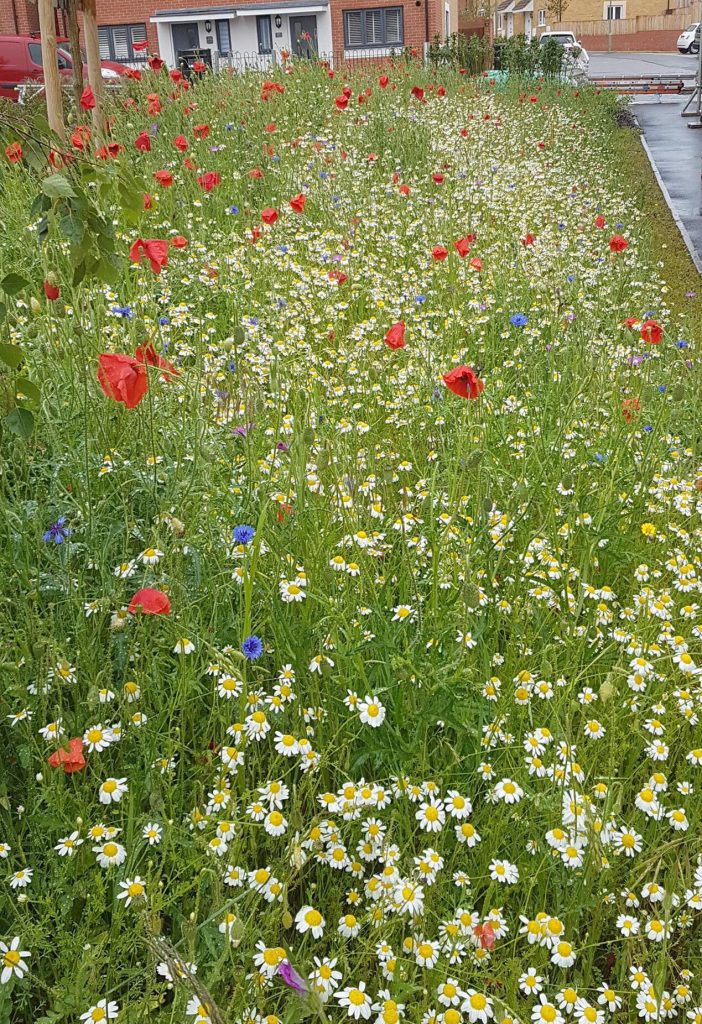 The strip of land was re-landscaped in September with the WF10 seed mixture broad-cast sown at a rate of 4g/m2 in a carrier of kiln-dried sand.

Because the work was carried out too late in the year for the flowers to blossom, The Grounds Care Group communicated with the local residents to explain what it was hoping to achieve and to ask them to keep off the freshly sown area. A few people seemed a little sceptical at first, especially when it became clear that the work wouldn’t create a neatly manicured lawn, but by the middle of the following May the flowers were in full bloom had received some very positive feedback, especially as the work has created an environments which is beneficial to bees and other pollinators.

Once the flowers have finished blooming the entire area will be cut and collected to maintain a tidy appearance. Beyond that, the strip will need to be over-seeded again for the next couple of years to build up a seed bank, after which there will be enough seed for the flowers to be regenerated by soil disturbance.