Posted on Thursday 21 Jun 2018 in Guides & Advice & Management for Different Landscape Areas
Widespread economic constraints have necessarily led to changes in attitude with respect to the management and maintenance of amenity grassland. Traditionally established practices have been brought into question, especially in the areas of ecology and conservation.

This has stimulated the provision of richness and variety in our urban areas. It is through this that important cost-saving benefits, both within the capital and revenue budgets of local authorities, can be achieved. However, the sowing of wildflower meadow can only go so far down the road to large scale cost-savings, in that many areas, especially in urban situations, are not considered appropriate for wilderness creation and so, mown grassland will dominate urban landscapes for the foreseeable future. It is in this area of low maintenance amenity grassland that we concern ourselves in this chapter. 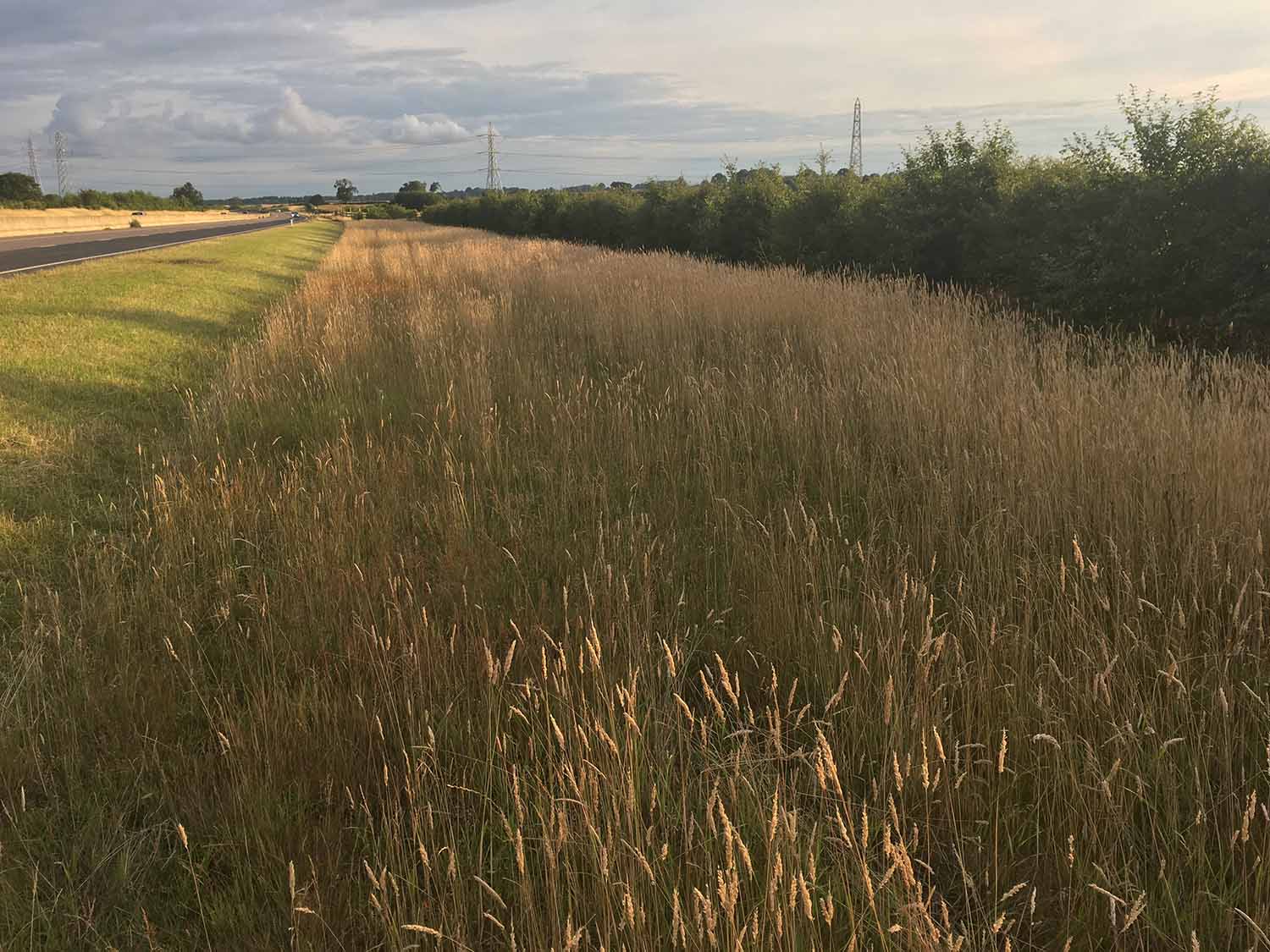 Because wildflower and conservation seed mixtures in general cannot conceivably be recognised as a panacea to end all high cost maintenance landscape problems, breeders working in the amenity grass seed industry have been searching for naturally shorter growing grasses. The cultivars required must have both very short lengths and vigorous growth, this latter quality ensures quick establishment with high competitive ability.

CABRIO  Ultra fine perennial ryegrass: Cabrio has a regrowth rating of 7.7, making it slower to re-grow compared to the quicker growing varieties which have a rating of 5.0 or less: this represents a big difference with regards to the potential maintenance requirements of a sward. Cabrio features in A22 Low maintenance.

ABERFLEECE Sheep Fescue: AberFleece exhibits very short vegetative growth and will not typically exceed 140mm when left unmown. A dark green colour is exhibited throughout the year is coupled with inherent drought and low nutrient tolerance. AberFleece features in A4 low Maintenance.

A16 Reclamation Country Parks - View A16

The areas that lend themselves to the low maintenance strategy include parkland, cemeteries, land around public buildings, factories and housing estates, school grounds, steep banks on sports grounds, golf courses and road verges.

It is important to stress that the adoption of a low maintenance strategy for a particular area is not simply a question of reducing visits to the site. This approach would inevitably lead to unsightly, unkempt-looking areas open to vandalism and tipping. Like many successful landscaping objectives a low maintenance sward has to be worked for, therefore the initial cost is likely to exceed that required to continue with the traditional cuttings – the savings only beginning to accrue as the sward matures and stabilises.

Well thought out design, starting with the first draft plan, is essential for later success. The low maintenance strategy can only hope to be applied successfully in the light of projected use, soil conditions, and the likely frequency of mowing. It is for these reasons that each site should be assessed individually.

Optimum conditions for achieving a low maintenance sward may include cleanness of seed-bed, adequate seed-bed nutrition to get the grasses off to a good start, a reasonable seed rate and choice of the most appropriate sowing season. Rapid establishment will ensure that the sown species dominate the sward and that undesirable coarse grasses and broad-leaved weeds are suppressed. Once established, the sward should gradually be brought down to a controlled height during the first year to help maximise the density of the sward. Only in the second year after establishment should the cutting frequency be reduced.

Traditionally low maintenance mixtures were fescue based, such as A4 low Maintenance this is because as a species many fescues are low nutrient tolerant and slow growing, traits that lend themselves to low maintenance areas, they also have the added advantage of attractive seed heads when left to grow long as the photo at the beginning of this section shows. The downside to fescues is that they are not as hard wearing or quick to establish as perennial ryegrass which is a major component of many amenity mixtures because of those desirable traits which are very useful in moderately or highly trafficked amenity areas.

Fortunately however help is at hand, in recent years there have been big advances in amenity turfgrass breeding, especially with reference to perennial ryegrasses which are traditionally quick growing. Many modern cultivars exhibit the desirable quality of slow regrowth once established and this can drastically reduce the amount of cut needed for an amenity mixture. Seed specifiers should familiarise themselves with and request slower growing cultivars from table L1 of the most current BSPB recommended list. Cabrio has a regrowth rating of 7.7, making it slower to re-grow compared to the quicker growing varieties which have a rating of 5.0 or less: this represents a big difference with regards to the potential maintenance requirements of a sward.

Germinal’s A22 mixture offers a lower yield, requires fewer cuts and achieves the shortest overall height when compared against other contemporary alternatives. Most significantly the A22 mixture required a minimum of 40% less mowing than the alternatives. A22 is now well proven under practical use and is already saving maintenance costs in a wide variety of applications.

The Use of Clover

The nitrogen fixing benefits of clover have long been understood. However, clover has traditionally not been suited to amenity swards because the plants were too large with outsized leaves that tended to dominate the sward – especially with regards to appearance. Modern breeding has led to smaller leaved varieties, such as AberAce, which is the smallest leaved white clover†. AberAce is perfect for blending into amenity swards so that the benefits of clover can be utilised without the plant dominating the grasses. [† NIAB recommended grass and clovers list 2015]

AberAce has a high stolon density, allowing it to fix an average of 150kg of N/Ha, thus eliminating the requirement for additional fertilisers on amenity areas of low and medium intensity usage and reducing applications on high trafficked areas. The root system of white clover plants has the benefit of improving soil structure and reducing soil compaction for improved movement of air, water and nutrients within the sward, thereby increasing overall plant health. 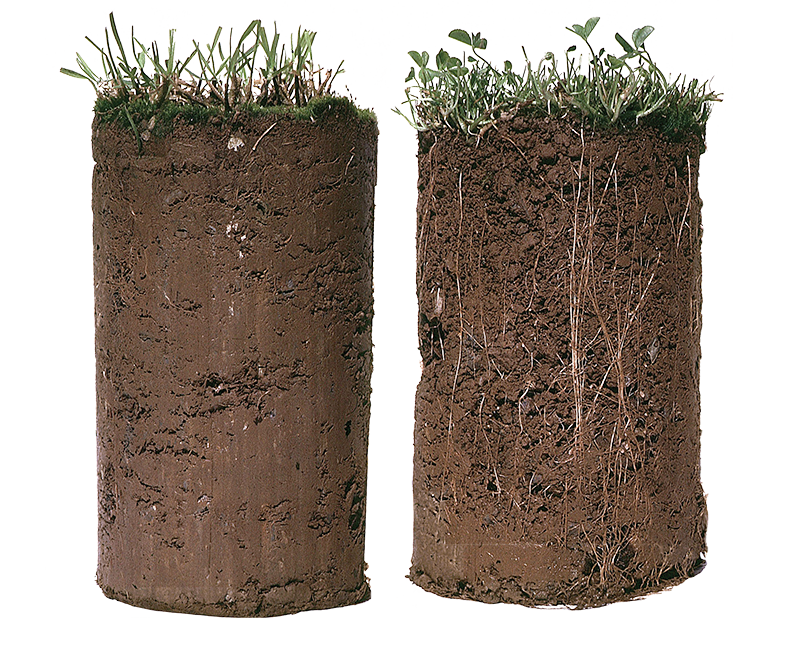 For large amenity areas such as public parks that are subject to informal play and recreational use, AberSustain is recommended. AberSustain is a low maintenance, self-sustaining mixture which is perfect for open parkland areas, domestic lawns, road verges and for green roofs. The mixture negates the requirement for costly applications of fertiliser and is unique because a large percentage of the varieties are UK bred from the IBERS breeding programme. As such they are ideally suited to UK conditions, All the varieties are chosen to complement each other perfectly, with AberAce white clover featured for its ability to synthesise nitrogen and sustain the sward. This creates a mixture that is environmentally and economically sustainable and therefore perfect for the time in which we now live.

In the landscape sector there is still a reliance on soluble compound fertilisers. These fertilisers give a rapid greening effect but are notoriously inefficient and it is widely accepted that  up to 60% of the nitrogen content is lost through leaching or volatisation into the atmosphere. This has both an economic and environmental impact.

The irony is that very often, compound fertilisers are bought because of  their lower per bag cost – this especially true when fertilisers are being specified to meet council tenders. In actual fact, because slow-release fertilisers such as GSR Tri-Phase utilise more efficient forms of nitrogen, they can contain higher percentages of nitrogen and be spread at lower rates as well as typically lasting three to four times as long as standard compound fertilisers. For this reason, a higher cost per bag is soon negated by the fact that you are buying half as much fertiliser and undertaking half the amount of applications.

The slow release fertilisers are broken down by a combination of moisture and temperature - Therefore, if it is too cold for grass growth, the nitrogen is not released and the risk of leaching into water courses and all the associated environmental impacts are decreased. The nitrogen is released uniformly over a prolonged period (typically 12-16 weeks compared to four weeks for compound fertilisers), thereby feeding the grass more consistently and reducing intense flushes of growth. This facilitates stronger, healthier grass with reduced mowing requirements.